The traditional Japanese summer must-have:
A delicate fan made of thin bamboo ribs

Our Commitment to Quality 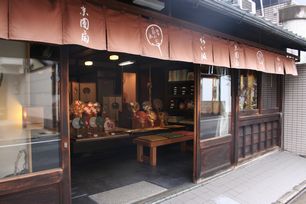 It all began in the capital

The Aiba atelier was founded in 1689 when it moved from a small village called Aiba in the Shiga prefecture to the then capital, Kyoto. Chobe AIBA, the Aiba atelier's seventh master, established the principles of the atelier as being the following : "Our hearts must only belong to the uchiwa and we must not touch any other art but only devote ourselves to the uchiwa." The current master of the Aiba atelier, also named Chobe AIBA, preserves this philosophy while developing a new culture of the uchiwa. 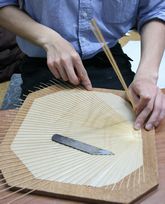 Everything from cutting and pasting together the bamboo ribs, which are the fan's bones, to the finishing touches, is made by hand in our atelier by our craftsmen. We are very careful about the materials we choose. We only use 4 to 5 year old bamboo from the Hyogo prefecture. As for the paper, we prefer handmade mulberry paper from the Toyama prefecture. 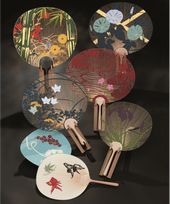 A cure for the soul

We create both fan-type uchiwa and uchiwa who serve a decoration purpose only. The decorative uchiwa can be used instead or with flowers in a vase, hung on a wall or any other way. They are designed with gorgeous gold leaves and gofun which is a traditional black pigment that has been used in Japanese art for hundreds of years. The uchiwa used as fans are often designed with patterns that, when viewed by reflected sunlight, show various shades of light. The structure in itself is very flexible as it is made with thin bamboo ribs. The word "uchiwa" comes from an old Japanese saying that means "repel the evil" and which pronunciation sounded a little like "uchiwa". This is the main reason why uchiwa are still considered strong lucky charms, making them the perfect gift.