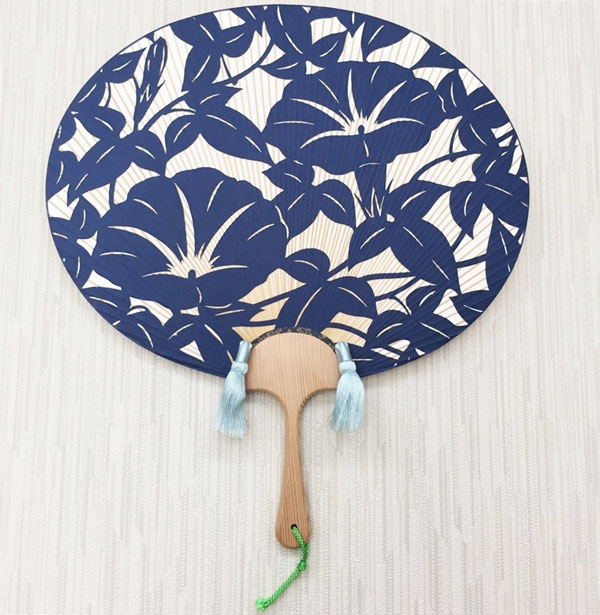 The traditional Japanese summer must-have:
A delicate fan made of thin bamboo ribs

What is Kyo uchiwa fans ?

Kyo uchiwa are a type of fan made in Kyoto prefecture. From the many types of Japanese traditional fans, there are three broad categories: Chinese-inspired, southern-inspired, and Korean-inspired with this craft coming from the third category.
The word "fan" in English can refer to both uchiwa, flat fans that do not open, and to sensu which are folding fans. This page refers to the uchiwa type only.
How Kyo uchiwa fans are structured is many thin bamboo ribs aligned to form a flat surface and the handle, attached separately, is made of lacquered and dyed tortoise-shell bamboo. The fans have front and back base papers pasted onto fifty to one hundred bamboo ribs (more ribs equaling more luxurious). The hyakudate (or "a hundred sticks" in Japanese) fan, which has a hundred ribs, is loved as a decorative item.
Kyo uchiwa fans are sometimes called Miyako uchiwa literally meaning “capital fan” or Gosho uchiwa or “imperial palace fan”. They are known for their elegant paintings, gorgeous Japanese lacquerware, and gold leaf decoration. Most of the Kyo uchiwa designs are inspired from traditional Japanese scenery, plants, the changing seasons or haiku and tanka poems.

Kyo uchiwa fans originate from Korean fans that were brought to Japan by wakou or pirates of various ethnicities active along the coasts of China and Korea in the 14th century. This craft slowly made its way from the coast to the inland of Japan and eventually to the region of Kyoto. This is where the Kyo uchiwa fans were developed and received the name of Kyo uchiwa or sometimes Kyoto uchiwa. They were also called Miyako uchiwa (capital fan) as Kyoto had been the capital of Japan at the time. Miyako uchiwa fans were beloved by the Imperial Court because of the beautiful artwork on them .
The inserted handle (sashie), unique to Kyo uchiwa fans, was only added at the end of the 19th century, after the Edo period (1603-1868). This is when two of the most important Japanese painting schools, who worked for the nobility, (Tosa and Kano schools) became interested in the fans and began painting on them, giving another name to the Kyo uchiwa: Gosho uchiwa (imperial palace fan). From this period onward, uchiwa fans, including Kyo uchiwa, became a popular household item for all members of society.
Most Japanese houses and stores are now equipped with air conditioning but fans are still an important part of life in Japan. They are used in offices, homes, during transportation, in festivals, or whenever one may need to cool themself off.
In the present, Kyo uchiwa fans are appreciated for their beautiful shapes. designs and versatility from use in daily life to a finishing touch for a yukata (a type of kimono worn in the summer). 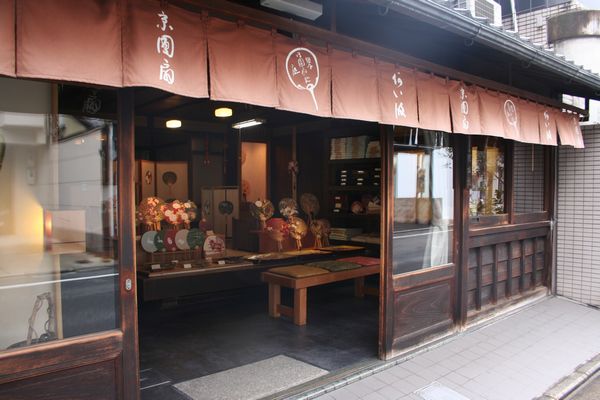 The traditional Japanese summer must-have: A delicate fan made of thin bamboo ribs