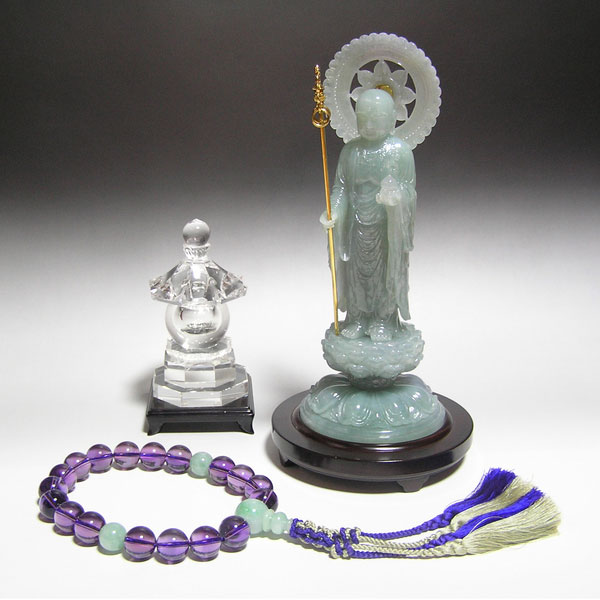 Mesmerizing, delicate and expressive work
A brilliant encounter of natural gems and an artisan's passion

What is Koshu crystal and precious stones carving ?

Koshu crystal and precious stones carving is a crystal and semi-precious gemstone carvings produced in the city of Kofu, Yamanashi prefecture. Using traditional methods, natural gemstones are carefully cut, ground and polished to produce stunningly beautiful works of brilliant, colorful and transparent art, which last for a long time.
From olden times, Kofu has been known for its abundance of crystal, which gave rise to the production of crystal artifacts and works of art.
Koshu crystal carving is characterized by its extensive range of designs, including vibrantly alive animals, auspicious rising dragons, and charming modern characters much loved by children. The production process involves cutting, carving and polishing the crystal in the rough. Since the raw material is very hard, the grinding and cutting must be carried out very carefully as one slip and the work can shatter. A classic Koshu crystal carving technique is called yukan and means to carve crystal into chain-like shapes. To produce work of such delicacy and high quality requires craftsmen with a good eye for crystal and command of the highest traditional techniques.

The origins of Koshu crystal carving date back to the Heian period (794-1185), when crystal gemstone was discovered in the Mitake Shosen Gorge and Mt. Kinpu area in the north of the Yamanashi Prefecture. The crystal was highly valued and often revered as a religious object in its own right.
During the period from 1830 to 1844, artisans were invited from the Tamatsukuri area in Kyoto to teach the techniques for hand-polishing gems to local people. The Koshu polishing technique of spreading emery powder on an iron sheet, and smoothing gems by hand was established at this time, and ornamental items started to be produced. In 1876, Shiro FUJIMURA, the governor of the Yamanashi prefecture, founded a municipal crystal processing department in Kofu, and encouraged training by sending artisans to study at technical courses in China. Unfortunately, by the end of the Meiji period the crystal had run out and the following Taisho period (1912-1926) saw Kofu capitalizing on its advanced polishing techniques to become a center processing imported crystal, agate, diamonds, and other precious stones. Once facilities were electrified, the area took up production of gemstone components for precision machinery.
After World War II, 80% of the production was exported. However, following the 1971 dollar shock, the focus changed to making craft products for the domestic market and by making full use of traditional techniques and modern technology, their overall quality as art works was improved.

See items made in Yamanashi