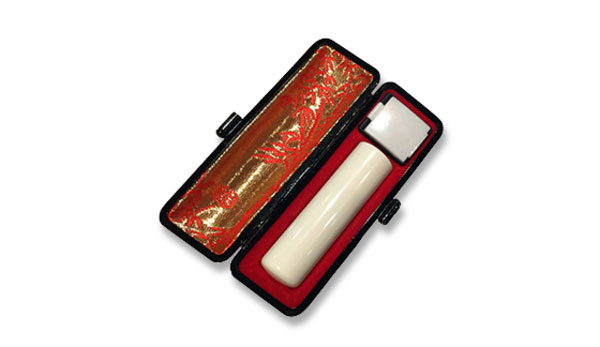 What is Koshu hand-carved seals ?

Koshu Tebori Insho are hand-engraved personal signature stamps produced in Kofu City and Fujiyoshida City of Yamanashi Prefecture. Bringing together all of Yamanashi’s engravers, dealers, and material producers, this local industry is unlike those found in any other prefecture. One of the special characteristics of Koshu Tebori Insho seals is that the materials are specified to Japanese boxwood, water buffalo horn, and crystal. The crystal seals were developed using the crystal cutting and polishing technologies unique to the Koshu region. Seals made of boxwood or water buffalo horn are made using a carving knife called kiteito to roughly carve the part of the seal for the characters in the owner’s name, followed by a finer carving using a different carving knife called hansashito to finish the lettering. For a crystal seal, the face is carved out by tapping a round chisel blade with a small mallet, and a flat chisel is used to complete the lettering through the same process. The face of the seal is smoothed with a whetstone, and the letters appear written as mirrored within this space. Passing down the traditional tools and techniques is an important part of the Koshu seal-making process. The production of the engraving knives is also an inherited practice that is necessary for the full expression of a beautiful completed seal impression.

The history of Yamanashi’s Koshu Tebori Insho began with the discovery of massive, high-quality crystals from the Ontake mountain range. In 1837, a crystal-processing factory was established in the Ontake area located in the suburbs of Kofu. Several different processing technologies emerged, and the number of crystal artisans and manufacturers increased. Woodblock carving techniques progressed, and boxwood and water buffalo horn as well as crystal started to be used as materials. The development of the signature seal industry can be seen in documents such as the 1854 Koshu Consumers’ Guide. These documents mentioned woodblock artists working in the printing industry in Kofu City, while in other publications, orders for materials such as rare grass-infused crystal and water buffalo horn seal materials were noted. The documents suggest that at this time there were already skilled artisans in business with various kinds of materials in circulation. The demand for signature stamps from the general public increased dramatically with the Grand Council of State Proclamation in 1873, and the market expanded through travelling and mail-order sales unique to Yamanashi Prefecture.

See items made in Yamanashi