What is Iga braided cords ?

Iga Braided Cords, called Iga Kumihimo in Japanese, are made in Mie prefecture. Mainly silk threads are used, often in combination with gold and silver threads.
This craft is known for rich silk threads, being dyed in a vibrant range of colors, and outstanding craftsmanship. Those that are braided by hand are especially famous. The cords have a distinct texture because of the tactile nature of braided threads and a lovely silk sheen.
These braided cords have a long history with their techniques being protected while continuously evolving, and handed down through many generations of artisans. Nowadays, along with braided cord obi sash ties (belt for kimono) and other kimono accessories that represent traditional Japanese culture, products like cell phone straps and other items that can be used in our current life style are being developed. The production areas are holding workshops where visitors can make key chains, bracelets and other everyday items and are promoting Iga Kumihimo as a familiar product. 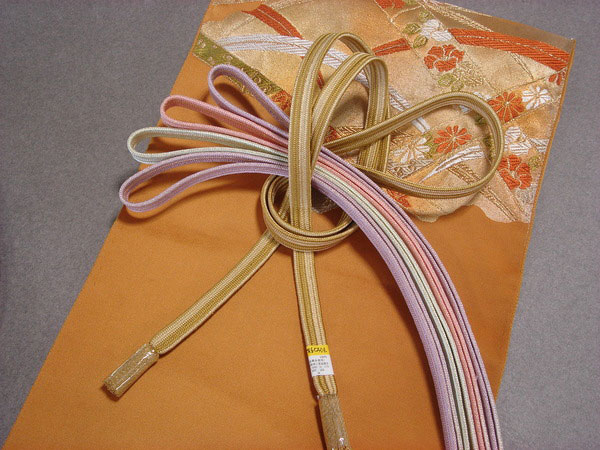 The techniques of cord braiding were first introduced from China along with Buddhism, so the cords were mainly used for robes worn by Buddhist priests and decorating scriptures. After the capital was transferred to the Heian Palace (located in Kyoto), braided cords were essential as accessories for the formal court dress of the aristocracy. Sashes made with braided cords have been appreciated for generations up to this day because of its artistic quality. During the Kamakura period (1192-1333), braided cords were used to adorn samurai weapons and armor. In the Muromachi period (1336-1573), they became popular as decorative cords for tea ceremony utensils, and were known and admired across Japan. In the Sengoku period (1467-1568), they were a functional and decorative part of armor, and became an essential part of sword scabbards during the Edo period (1603-1868). With the encouragement of the Edo government, competitive craftsmen making armor and personal ornaments spurred each other which resulted in improving their techniques and skills. The number of braiding techniques increased, and this craft came to be used as cords on pill boxes, half-coats, or tobacco cases. In the Meiji period (1868-1912), a law banning the wearing of swords by samurai came into effect, and this had a hugely negative impact on production. However, braided cords have adjusted to the change of life style and many new products using their traditional techniques have been developed to this day.