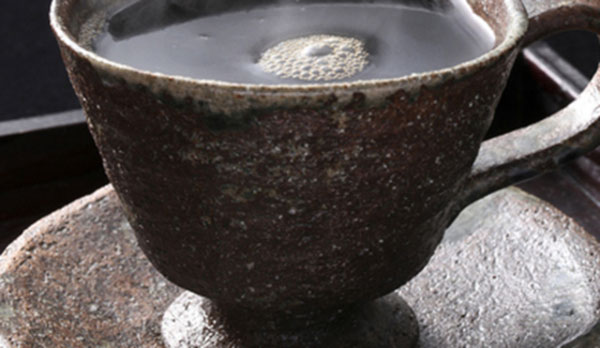 What is Iga ware ?

Iga ware (called iga yaki in Japanese) is a form of porcelain produced in the area around the city of Iga, Mie prefecture. The main production areas of this craft are the sites of Makiyama and Marubashira in the Ayama district of Iga and the excellent, heat-resistant clay from this area is used. Thanks to its high level of fire resistance, this type of porcelain is famous for being well suited as earthenware pots and heat-resistant tableware. A notable feature is its reddened, tightened skin that is plain and strong. The other notable feature of Iga is its glassy, greenish quality known as vidro* glaze which is produced by baking at a high temperature. The vidro glazing happens when ash falls onto and sticks to the ceramics baked at a high temperature, producing a glassy quality. Rather than just allowing the ash to bake where it has stuck, the appearance of the pieces is carefully considered and the ash placement is changed by the artisan.
Iga ware is said to be quite similar to Shigaraki ware, which is from the neighboring Shiga prefecture, but there are differences. Iga ware tends to be harder and heavier than Shigaraki ware and has handles or as the saying says “Iga has ears, Shigaraki has none” with "ears" referring to handles. These ears are a feature from a type of Iga ware known as Tsutsui iga, which was born during the Azuchi-Momoyama period (1568-1600). Iga ware from this time period is referred to as old Iga and renowned for having a wide variety of unique pieces.

*Vidro is Portuguese for glass.

Iga ware is said to have been created during the Nara period (710-794), but the main items baked at the time were mortars and pots. It is said that back then, there was not a significant difference between Iga ware and Shigaraki ware. The main point of divergence from Iga ware came during the Azuchi-Momoyama period, when wabi-sabi* and tea ceremony culture was flourishing. Many distinctive pieces of Iga ware were produced at this time, including pieces with wave-like patterns that were created using spatulas or a technique of deliberately breaking the piece by hand to generate an “out-of-tune beauty”. This style of Iga ware was backed by Sadatsugu TSUTSUI, feudal lord of what was then Iga province, and Takatora TODO, also a feudal lord. These kinds of pieces were particularly prized in tea ceremonies for the sense of wabi-sabi they evoked. Thus, starting with Sen no Rikyu (influential master of the tea ceremony, 1522-1591), Iga ware came to be loved by many masters of the tea ceremony.
Today, Iga ware mainly consists of tableware for daily use, but at that time in the Azuchi-Momoyama era, Iga ware water jugs and vases were frequently produced. This craft was discontinued all together after the demise of the Azuchi-Momoyama period in 1600. However, during the middle of the 1700s Iga ware started production again of daily necessities, which continues to this day.