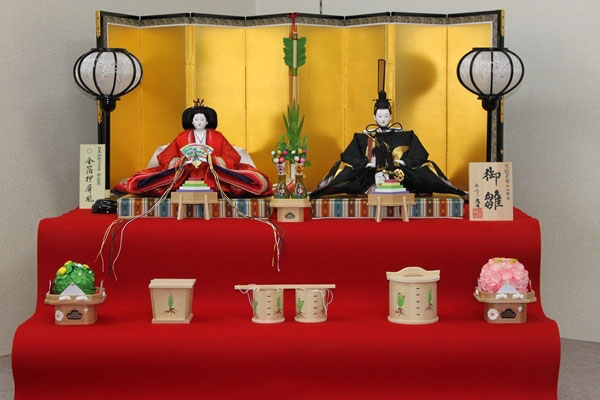 Gorgeous and luxurious garments
made from beautiful materials

Suruga Hina Dolls are dolls made in and around Shizuoka City in Shizuoka. Suruga Hina Dolls are larger than other dolls as thick rice straw is used to form the body which is the center of the doll. It is said that rice straw was used because Shizuoka City and the surrounding area were famous for rice production and rice straw was easy to obtain. The garments for the dolls are made separately for the upper part and lower part, giving it a more voluminous and gorgeous appearance when finished. As the production of the upper part and lower part of these dolls can be carried out separately, mass production is possible. Suruga Hina Dolls account for 70% of the total production of the bodies of Hina dolls in Japan which is more than that of the Kyoto Hina Dolls. The process in making Hina Dolls that requires the artisan’s skill the most is called ‘Furitsuke’ (arrangement of the posture) in which the doll’s arms are carefully bent. This is where the individuality of an artisan is shown, and an expert can identify the artisan by looking at the posture of the doll’s arms.

The origin of Suruga Hina Dolls are two Tenjin dolls. Michizane SUGAWARA, an aristocrat and politician who lived from 845 to 903, was worshipped as a god after his death, and was called Tenjin. One of the Tenjin dolls that are thought to be the origin of Suruga Hina Dolls is neri Tenjin, which is a doll made from a mixture of paulownia wood sawdust and wheat starch, and then colored with a brush. The other doll, made in the Edo period, is a Tenjin doll wearing clothes, which is a doll unique to the Suruga region. The oldest Tenjin doll wearing clothes was made in 1853. These two dolls are thought to be the origin of Suruga Hina Dolls. During the Edo period (1603 - 1868), craftsmen from Kyoto and Edo (current Tokyo) brought techniques and skills of Kyo Hina Dolls and Edo Hina Dolls to Suruga. These techniques were combined with those unique to the Suruga region, and high quality hina dolls were made. From then on, besides standing Tenjin dolls and hina dolls, Shinno hina dolls (young couple dolls) and Takasago dolls (dolls of an old couple) were made as dolls for seasonal festivals. In the late Edo period, Dairi hina dolls imitating the emperor and empress, and dolls for the Boys' festival held in May were made. After this, other dolls decorated with the couple hina dolls including the three court ladies and five musicians were made to complete a seven tiered hina doll set with a total of fifteen dolls. Today in Shizuoka (as of 2015), there is still a custom to decorate Tenjin dolls and dolls for the Boys' festival together with the emperor and empress hina dolls in homes where there are boys.