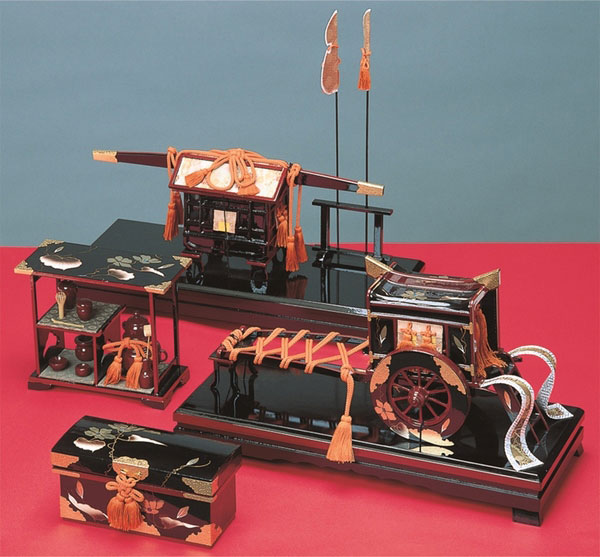 What is Suruga doll accessories ?

Suruga Hinagu (Hina Doll accessories) are a traditional craft produced mainly in Shizuoka city, Kakegawa city and Yaizu city in Shizuoka prefecture. A distinctive feature of Suruga Hinagu is that every piece of furniture, such as chests of drawers, oblong chests and dressing tables, is manufactured using the same processes as life-size furniture into details. Using the traditional craft skills that have been developed in and around Shizuoka prefecture, including joinery, turnery, lacquering, Maki-e and metal fittings, the craftsmen lovingly create Suruga Hinagu. Each process of making Suruga Hinagu has created a specific category of local products in Shizuoka prefecture, such as Suruga Sashimono (joinery), Shizuoka Hikimono (turnery), Suruga Shikki (lacquer ware), and Suruga Maki-e (lacquer decoration). In particular, the manufacturing of Suruga Hinagu is said to have originated from Suruga Maki-e, as it is typically decorated with beautiful Maki-e of flowers, birds, mountains and water and arabesque patterns. Together with Suruga Hina Dolls, Suruga Hinagu has been adored through the centuries. Furthermore, the manufacturing of Suruga Hinagu was divided into several processes, from making the wooden base to finishing with maki-e. This established a system of a division of labor, which enabled mass production of hinagu, despite the fact that they are all made by hand. As a result, Suruga Hinagu now has a large share in the hinagu market in Japan.

In Suruga in the Muromachi Period (1392 - 1573), there was a custom to present papier-mâché hina dolls to young ladies. Later, in the period of the Tokugawa Shogunate (1603 - 1867), the second shogun Hidetada TOKUGAWA and the third shogun Iemitsu TOKUGAWA recruited craftsmen from all over Japan to construct Kunozan Toshogu Shrine and Sengen Shrine, respectively. These craftsmen remained in Suruga and spread their exquisite skills in all kinds of fields. In addition, there were various advantages in Suruga, for example, the warm and humid climate was suited for manufacturing lacquer ware. Thus, Suruga came to flourish as the center of handicraft production. They also succeeded in expanding their sales network, as they were located between Edo (Tokyo) and Kyoto, which were big cities in those days. This also helped Suruga expand its sales network. By the time of the Taisho Period (1912–26), wholesale associations were formed to strengthen the unity of the industry. In addition, cooperation began with the whole sellers in Tokyo to expand the sales of hinagu across Japan.