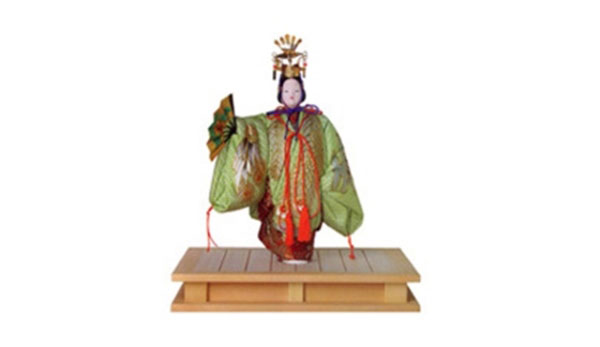 Dolls in harmony with modern life
Masterpieces of tradition

Edo Kimekomi Dolls (called Edo Kimekomi ningyo in Japanese) are mainly produced in Taito, Sumida, and Arakawa wards which are located in northeastern Tokyo. The doll’s body, arms, and legs are made of toso, a modeling material made of paulownia sawdust mixed with wheat starch paste. The head is made from dolomite clay, silk threads are used for hair, and the costumes are made from silk or cotton textiles. A distinct part of the production process involves cutting small grooves into the doll, and tucking the ends of costume fabrics into the grooves. These dolls have no separate items of clothing, instead, pieces of fabric are pasted onto the torso and tucked into the creases. Therefore, making the base shape is considered one of the most important processes, and can bring out the artisan's style. Edo Kimekomi Dolls have slightly narrow faces and well-defined facial features. They were first made using skills developed in Kyoto and brought to Edo (former name for Tokyo), but as the culture and fashions changed, the dolls took on the Edo style. The features of Edo Kimekomi Dolls are sharply distinguished, whereas the faces of Kyoto dolls are fuller and softer. Today, a wide variety of Edo Kimekomi Dolls are produced such as dolls for the Girls’ Festival or the Boys’ Festival, and ukiyo dolls (dolls reflecting the Edo culture). The toso material of the dolls make them light and easy to carry, while durable with little loss of shape.

The origin of Edo Kimekomi Dolls dates back to around 1736-1741 in Kyoto, when a Shinto priest of Kamigamo Shrine, Tadashige TAKAHASHI, used scraps of willow left over from woven boxes from shrine festivals to make dolls and dressed them with fabric remnants from priests’ robes. Since the dolls also originated in the Kamo area of Kyoto, they used to be called Kamo dolls, Kamo river dolls, or willow dolls. Later, when doll artisans began to market the dolls, they came to be known as kimekomi dolls as the term kimekomi refers to the tucking of fabric into grooves in the doll. Between 1711 and 1715, the doll production techniques were brought to Edo from Kyoto, and the doll makers developed the unique Edo Kimekomi Dolls. During the latter half of the Meiji period, there was a large shift in production methods from pasting fabric onto a wood-carved torso to the present-day technique of using molds and toso mix. This opened the possibility of mass production and a diverse range of kimekomi dolls were made in large numbers. Today, Edo Kimekomi Dolls are still handmade using old methods and have been designated as a traditional craft by the Minister of Economy, Trade, and Industry.