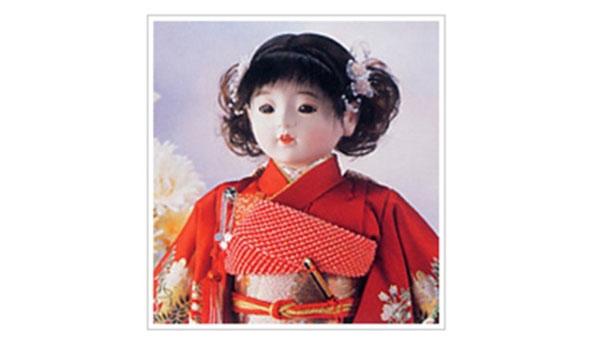 What is Iwatsuki doll ?

Iwatsuki doll (called Iwatsuki ningyo in Japanese) is a type of doll made in Iwatsuki ward, Saitama prefecture. This doll is known for its round face with big eyes, smooth and beautiful skin, and shiny human-like hair. The white skin comes from a white pigmented mixture of water, glue, and powdered calcium carbonate called gofun while the hair is made of raw silk. Soft silk resembling human hair is used and the hair is carefully tended to by a doll hair stylist.
Many paulownia wood products including chests and Japanese traditional sandals, (geta), have been produced in Iwatsuki ward and its surroundings for a long time. This ward is also a former castle town blessed with greenery, which had a good source of water that made a suitable environment for dollmaking. Iwatsuki ward prospered because of this craft. Even now, various Japanese dolls including Hina, Gotatsu, and Ukiyoe dolls are produced in this area.

The history of Iwatsuki dolls goes back to the Edo period (1603-1868). Many artisans visited Iwatsuki on their way to the construction of Nikko Toshogu Shrine (registered as a UNESCO World Heritage site) that started in 1634. Some of the artisans settled down in Iwatsuki and among them, there were artisans who were skillful at making dolls. Also, because Iwatsuki was blessed with a suitable environment for creating dolls, it became a "city of dolls" and a new technique using paulownia sawdust called tosogashira was established.
What greatly helped Iwatsuki become the "city of dolls" is the pastime of playing with dolls, hina asobi, being brought to Edo (ancient name of Tokyo) from Kyoto. This became such a popular activity in Edo at that time that even Kazuko TOKUGAWA (a granddaughter of the important military dictator Ieyasu TOKUGAWA, 1607-1678) brought dolls as gifts when she went to Kyoto's Imperial Court in 1626. The doll markets and merchants increased greatly, with the bustling activity depicted in an illustrated guide of pre-1868 Edo called Edo meisho zue. The dolls gradually became part of the Girls' Festival, also called Hina Festival, which is still held every March 3rd.