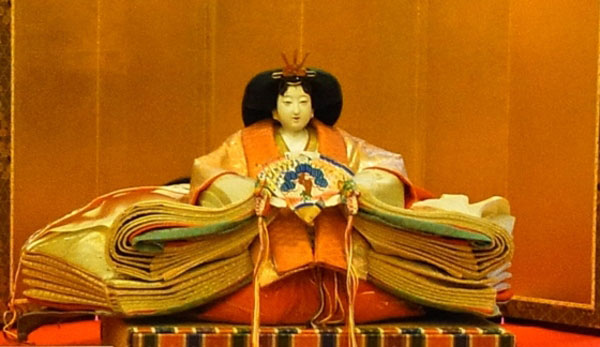 Edo Sekku Ningyo are dolls produced in 12 of the wards in Tokyo and four cities in Saitama Prefecture. They are costumed dolls, such as ichimatsu ningyo (play dolls), gosho ningyo (palace dolls) and fuzoku ningyo (dolls in period costumes), as well as decorative armor. They are usually displayed during the Doll's Festival or the Boy's Festival. In the late Edo Period (1603 - 1868), there was a market selling hina dolls and dolls in samurai armor in Nihonbashi Jikkendana (Tokyo), which was counted as one of the most popular sites in Edo. Ordinary people of that time were becoming wealthy enough to hold a luxurious and grand celebration for their child's first annual boys' or girls' festival to pray for their health and prosperous future. Edo Sekku Ningyo were originally displayed outdoors, but later displayed indoors; therefore they became distinctively small. These Edo-style dolls have a natural feel, are realistic and delicately crafted. The armor is made so realistic and accurately detailed that some of them could be mistaken for the real thing. The use of carefully selected natural materials, including leather, silk threads, wood, paper, steel and copper, and traditional production processes makes it possible to produce simple but elegant armor, the pride of samurai in the Edo Period, even today.

Manufacturing of dolls started in Edo, current Tokyo, in the early days of the Edo Period (1603 - 1838), under the influence of doll making in Kyoto. However, it was not until the Horeki Era (1751 to 1763), about 250 years ago, that a unique Edo style was established. In 1761, during the reign of the 10th shogun Ieharu TOKUGAWA, a doll-making artisan from Kyoto who invented "Jirozaemon-bina" (Hina dolls with round faces) came down to Edo to open a doll shop. Since then doll making became widely spread across Edo. One of the main dolls produced around 1716 to 1736 were "Kyoho-bina" dolls, which were relatively large in size and sumptuous and opulent. They were considered to be "luxury items" and even the government was avoiding them. On the other hand, Jirozaemon-bina were well-received since their facial expressions and structure were more accessible to ordinary people, and thus they became a part of the Edo culture. The heavy influence of the style of Jirozaemon dolls can be seen in the modern Edo Sekku Ningyo, which are still cherished today.