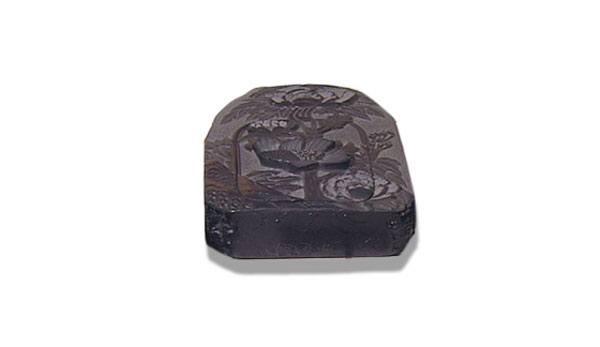 What is Ogatsu inkstone ?

Ogatsu inkstone (called Ogatsu suzuri in Japanese) is a craft produced in the former town of Ogatsu (now city of Ishinomaki), Miyagi prefecture, where artisans still carefully hand carve and polish every piece.
What is unique to Ogatsu inkstone is its smoky black natural patterns. Also, the quality is dependable as inksticks (solid ink) can be grinded smoothly with good ink production.
Ogatsu stone is a black hard slate which is known for being resistant to compression and bending with low water absorption. Therefore the slate is also used for roofing tiles and building constructive material. Recently it has started being used for serving plates and other tableware.
The production of Ogatsu inkstone was temporarily suspended due to the 2011 earthquake off the Pacific coast of Tohoku followed by a tsunami. Fortunately, neither the technology nor the quarries were lost, and the production was restored and helped with reconstruction of the region.

Ogatsu inkstone dates back to the Muromachi period (1336-1573). Scholars believe that the inkstone already existed around that period because the term suzuri hama was mentioned in a history book from 1396, with suzuri meaning "inkstone", though this cannot be stated with certainty. There is also an anecdote from the Edo period (1603-1868) that the lord of Sendai domain, Masamune DATE was very pleased to be gifted an Ogatsu inkstone. An inkstone was discovered in his grave, so it can be inferred that it was one of his treasured possessions. The artisans were appreciated by the lord's son as well and they finally became employed by the Sendai domain. Not only artisans, but the quarries were placed under the protection of the domain. Under the protection of the Sendai domain and with an abundance of good quality quarried slate, the inkstone industry thrived. According to a book called Honai Fudoki (containing descriptions of regional climate and culture), Ogatsu inkstones became a local specialty and were valued as quality items. In 1985, Ogatsu inkstone was registered as a Japanese Traditional Craft. The techniques to make beautiful and practical Ogtatsu inkstones have remained alive and well. 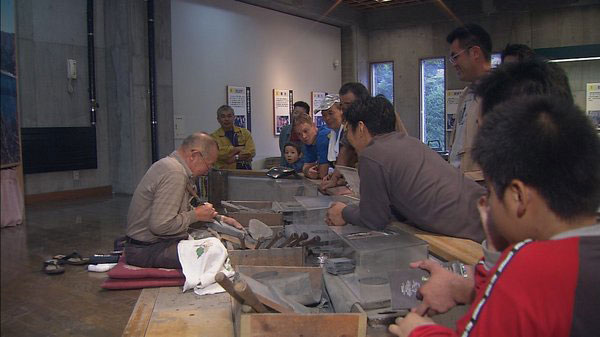