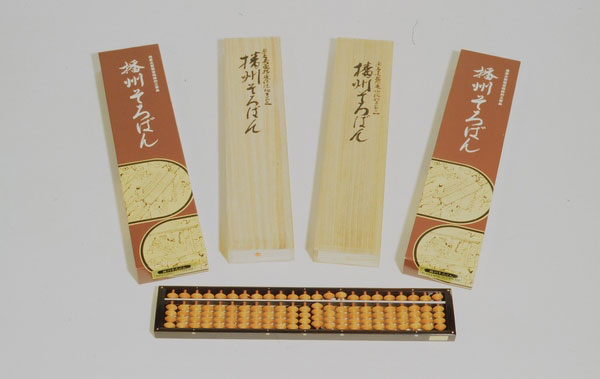 What is Banshu abacus ?

Banshu abacuses (called Banshu soroban in Japanese) are produced in the city of Ono, Hyogo prefecture. Ono, an agricultural area blessed with a warm climate, started abacus production during its off-season.
Japanese abacuses are traditional tools that use columns lined with beads quickly moved with the fingers to do calculations. This craft has a production process divided into several phases and became one of Hyogo's representative traditional crafts due to high productivity and great techniques.
The origin of this craft is the Otsu abacus, which was originally introduced from the Nagasaki prefecture, but developed in the city of Otsu, Shiga prefecture. Otsu was a transportation hub bustling with merchants, as it has easy access to the commercial capitals of Osaka and Kyoto. Therefore, Otsu flourished with abacus production.
The daily use of Banshu abacus in schools or by merchants gradually increased its production volume while developing its product range to include different colors and unique shapes meant to draw children's attention. Although the recent proliferation of computers and calculators has brought about decreasing demand for abacuses, the Banshu abacus remains a vital item for arithmetic education at home and in school.

The history of the abacus goes back to the late Muromachi period (1336-1573), when abacuses were introduced from China to Nagasaki prefecture. Then, they were brought to the city of Otsu in Shiga prefecture, which is near the business districts Osaka and Kyoto, encouraging abacus production and commercialization.
When Hideyoshi TOYOTOMI (powerful feudal lord) captured Miki Castle in the city of Miki, Hyogo prefecture (near the city of Ono) in 1580, some residents escaped to Otsu. The residents who had learned how to make abacuses began production after returning home to Hyogo prefecture, which is the root of Banshu abacuses.
During the Edo period (1603-1868),terakoya or private temple schools taught children how to read, write, and calculate on the abacus. As a result, abacuses soared in popularity especially in business districts keeping up with the spread of terakoya, resulting in eight abacus wholesalers and over two hundred subcontractors by the end of the period.
Following the first Sino-Japanese war (1894-1895), the city of Ono had newly invented bead making machinery, which enabled mass production of abacuses. Moreover, the craft grew in demand as the economy grew after World War II after the School Education Law passed, which guaranteed nine years of free education. Abacuses have experienced a slowdown in demand due to the widespread use of computers but still boast full production with over 530,000 pieces made every year.