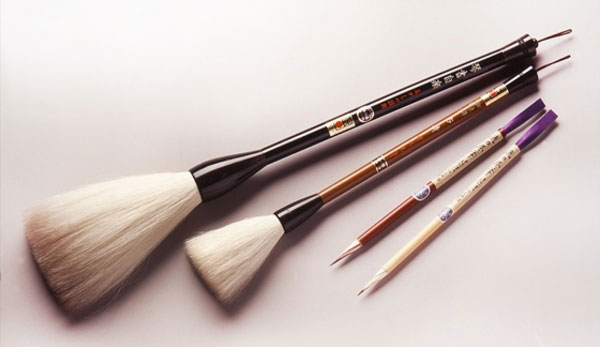 What is Nara brushes ?

Nara brushes (called Nara fude in Japanese) are brushes produced in and around the neighboring cities of Nara and Yamatokoriyama, Nara prefecture. Nara is considered to be the birthplace of brush making in Japan. The oldest existing brushes in Japan are seventeen Tenpyo brushes, which are part of the imperial treasures that belonged to Emperor Shomu (the 45th emperor of Japan, 701-756). These brushes are kept in the Shosoin Repository*.
Nara brushes are composed of ten or more types of animal hair with varying levels of elasticity and length that are skillfully combined using a traditional method called nerimaze hou. The animal hair used for Nara brushes include squirrel, flying squirrel, weasel, Japanese raccoon dog, sheep, horse, deer, and rabbit hair. The quality of the completed brushes is affected not only by the species but also the difference in hair quality of individual animals, variation in body part, or time of year when the hair is harvested.
During brush production, artisans examine the specific features of the hair, adjust, and blend them many times so that different qualities of the hair are well distributed without any deviation. During the mixing step, the hairs are individually soaked in water to harden them, the composition and size is determined based on the characteristics of the hairs, and they are blended to complete an attractive brush tip.

*The Shosoin Repository is a building located in Nara, a former capital of Japan, that has been around since the eighth-century. It not only has a collection of treasures dating back to the Silk Road, it also preserves over 10,000 hand-written documents all dating from the Nara period (710–784). Today, the repository is under the control of the Imperial Household Agency.

Brushes have a long history and are said to have originated in China, about 2300 years ago, when a general presented a brush made from animal hair to the first Emperor of Qin (259BC- 210BC). Then, they were first brought to Japan in the early Asuka period (592-710). As Chinese culture was imported to Japan, more varieties of brushes were imported as well.
The brush making tradition began in Nara in the year 806, when a Japanese envoy to the Tang dynasty, Kukai (1185-1333, an important Buddhist monk and calligrapher), returned from China. He brought back production techniques and taught them to Kiyokawa SAKANAI in Nara. At the time there were a lot of monks studying in the area and the brushes were spread among high priest and scholar monks.
Later, when kana characters (Japanese syllabic script) started to be used, there was a new demand for delicate brushes due to the need to draw curved lines easily. Because of this, the foundation of Nara brushes was established by brush artisans. They brought out the best features of the animal hairs and skillfully combined them to make brushes.