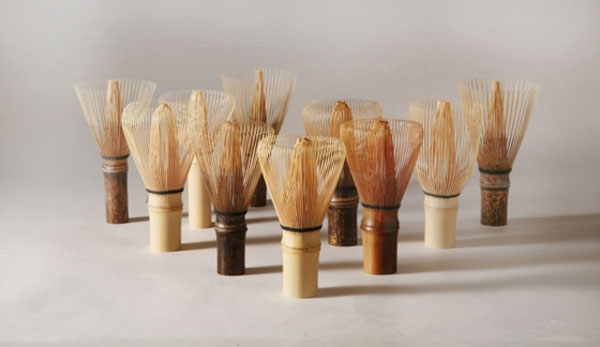 What is Takayama tea whisks ?

Takayama Tea Whisks, called Takayama Chasen in Japanese, are tea whisks produced in Takayama Town, Ikoma City, Nara Prefecture. Each tea whisk is completely made by hand and they have a top class share in the total Japanese tea whisk market. The tea whisk, made of bamboo, is one of the tea ceremony utensils, and is used for making tea. The end of a 10 centimeter long bamboo tube is finely split and is bound with thread. Tea whisk production started in the middle of the Muromachi period (1336-1573), and now more than 60 types of tea whisks are made. The shape of the whisk, type of bamboo, and the color of the thread differs depending on the purpose and the school of tea ceremony. Tea whisks are also used for other purposes than making matcha, the classic powdered green tea. Well-known examples are buku-buku cha, which is a frothy tea in Okinawa, and bote-bote cha, which is a soup-like tea in Matsue, and for these teas, somewhat larger whisks are used.

Takayama Chasen were first made in the middle of the Muromachi period (1336-1573). It is said that Juko MURATA, known as the founder of simple tea ceremony, wabi-cha, requested Minbunojo Nyudo Sosetsu TAKAYAMA to make him some tea whisks. Unfortunately, as there is very little information about both of them from those times, we are unable to know about the history in detail, but we do know that the tea whisks made by Minbunojo Nyudo Sosetsu TAKAYAMA were presented to Emperor Go-Tsuchimikado by Juko MURATA. The Emperor was delighted and bestowed the name "Takaho", and so the tea whisk came to be known as "Takaho Chasen". It is unclear when or who changed the name of Takaho Chasen to Takayama Chasen, but the Chinese character of 'taka' used in the family name and name of the area Takayama was changed to the same Chinese character used in Takaho. In the background of the success of the local Takayama tea whisk industry, we find a plentiful supply of good quality bamboo harvested in the mountains near Takayama, and a ready market in the nearby cities of Kyoto and Osaka.