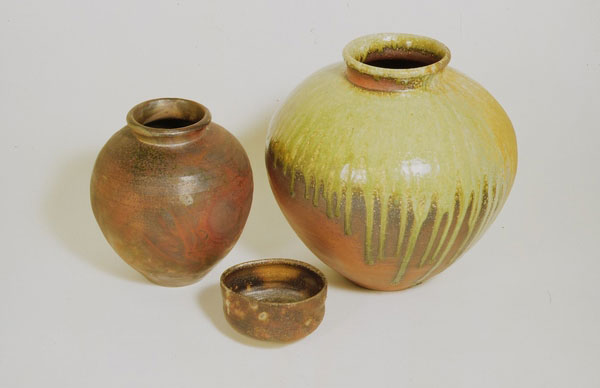 Tamba-tachikui ware (called Tamba-tachikui yaki in Japanese) is a form of pottery produced around Konda in the city of Sasayama, Hyogo prefecture. It is one of Japan's Six Ancient Kilns. Together with Bizen, Tamba, Echizen, Seto, and Tokoname, Tamba-tachikui ware is considered to be one of the most outstanding Japanese kilns with traditions that remain even today. Since the kiln opened eight hundred years ago, ceramics for daily use have been baked at this kiln.
This craft has a unique ash covered color which appears while baking for around sixty hours in a climbing kiln* at a temperature of approximately 1300℃ (about 2372℉). This is a chemical reaction from the ash of pine firewood, which is used as fuel and sprinkled onto the vessel, melting together with enamel and iron contained in the clay. Each ceramic piece is unique, as various patterns and tints are produced depending on how the ash is applied and how the flames come into contact with the piece.
While many other forms of pottery are produced with a clockwise-turning lathe, the lathes used for Tamba-tachikui ware rotate in a counterclockwise direction.

*A climbing kiln is an ancient type of pottery kiln brought to Japan from China and Korea.

The Tamba-tachikui kiln is thought to have opened at the end of the Heian period (794-1185). Until the Azuchi-Momoyama period (1568-1600), Tamba-tachikui ware was known as Onohara ware. Large pots, jugs, mortars and kneading bowls were made by piling up string-shaped clay without using a lathe and baking without glaze in ascending kilns (formed through digging holes in the hillside). Large sake bottles and buckets were also produced by the end of this period.
Around the year 1611, a climbing kiln was built at the base of the kiln. The craft was known as Tamba ware at this time and mass production in climbing kilns was possible. Small pots such as pepper pots and oil pots as well as katakuri bowls* came to be produced. In the middle of the Edo period (1603-1868), the area started to produce a great variety of products, including tea utensils such as tea containers, pitchers and tea cups, as well as small sake bottles.
From the Meiji period (1868-1912), the center of Tamba ware was moved to the nearby Tachikui region and the market expanded as far as Kyushu and Tohoku under the name Tachikui ware.

*A type of drinking bowl with a dip in one side of the mouth.