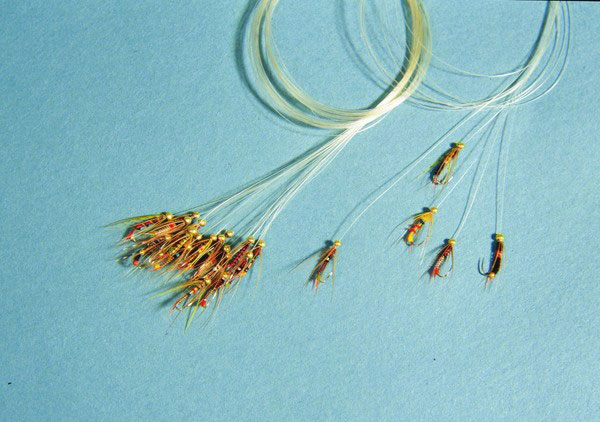 Tiny works of art on the wing
Feather, gold leaf and lacquer

What is Banshu fly-fishing flies ?

Banshu Kebari are fishing flies used as artificial-bait hooks for fishing, produced in Nishiwaki City, Hyogo Prefecture. They are characterized by their exquisitely fine workmanship; bird feathers wound with silk thread around a small 1cm hook, adorned with gold leaf and urushi lacquer become brilliant fleeting flies to catch fish.Banshu Kebari are mainly for catching sweetfish, and fishermen can choose from many different types of fishing flies depending on the season, weather, or time of day. A variety of designs are also produced for other types of fish, and to meet natural conditions such as differing depths and water conditions. It is said that there are more than 500 different types of fishing flies.

Fishing flies likely to be the origin of those made today are mentioned in a Kyoto guide titled “Kyo Suzume Ato-oi” printed in 1678 in the early Edo period, and it is said that an artisan called Iemon was making fishing flies at that time. Moreover, in a geographical description and sightseeing brochure called Kyo Habutae published in 1685, we find a description of a “fishing-fly head,” which lets us know that Iemon was producing fishing flies as products. In the late Edo period, the production techniques were introduced to the Banshu region (present-day Hyogo Prefecture) from Kyoto, where fly-fishing for sweetfish had been popular since the Genroku era (1688-1704). In those days farmers produced fishing flies as a sideline. By the middle of the Meiji period (1868-1912), fishing fly techniques became so artful that fishermen were catching a remarkable number of fish; in consequence they repeatedly received awards at Marine Product Fairs or other exhibitions, helping publicize the good quality of Banshu Kebari among many fishermen.