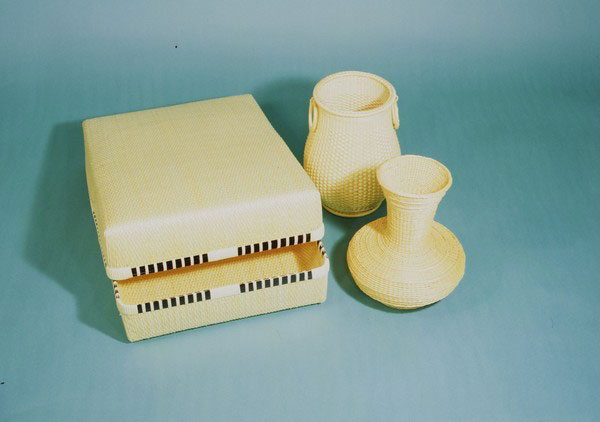 What is Toyooka wicker crafts ?

Toyooka Wicker Crafts, called Toyooka Kiryu Zaiku in Japanese, is wickerwork produced around Toyooka City, Hyogo Prefecture. The origins of the craft are found in the baskets woven from Salix koriyanagi, a species of willow naturally growing in the area around the Maruyama River, and when Toyooka was a thriving castle town, basket weaving was established as a local industry. Their characteristic features are natural textures and the durability of strong and supple willow. Every piece is hand-woven by artisans, and overflowing with warmth. They are practical traditional crafts quietly blending into our daily modern life. There are various weaving techniques: six different types of basic weaving, 33 types of in-fill weaving, and 18 different styles of finishing for the basket rims. By combining them, an extensive range of shapes can be created. The main traditional articles are deep round baskets, and square containers with lids used as a lunch box. Recently, Kiryu Zaiku handbags designed in modern styles are also gaining popularity.

Toyooka Kiryu Zaiku can be traced back to the beginning of the 1st century. It is said that in AD 27, the prince of Silla (currently Korea), Ame no Hiboko no Mikoto, introduced wickerwork to Japan. Historians consider that the craft had started from weaving everyday items including baskets by using willows naturally growing in the area along the Maruyama River, and the techniques were established around the 9th century. A Toyooka Kiryu Zaiku titled “Tajima no Kunisan Yanagibako” is among the articles held in the Shoso-in Treasure House of Todaiji Temple. Later, in the Edo period (1603-1868), Lord Takamori KYOGOKU promoted cultivation of willow and basketry techniques as well as the distribution of the products and developed the craft as a local industry, which resulted in Toyooka Kiryu Zaiku being known throughout the country. In the Meiji period (1868-1912), production of Western style handbags started, and in the Taisho period (1912-1926), hand baskets with a lock came into vogue, and they were called "Taisho Baskets". Around 1965, Crown Prince Naruhito attending Gakushuin Kindergarten regularly used a small basket which was known as the "Naru-chan Bag", and it became immensely popular. Today, the industry has also broadly launched into general merchandise and interior fields.