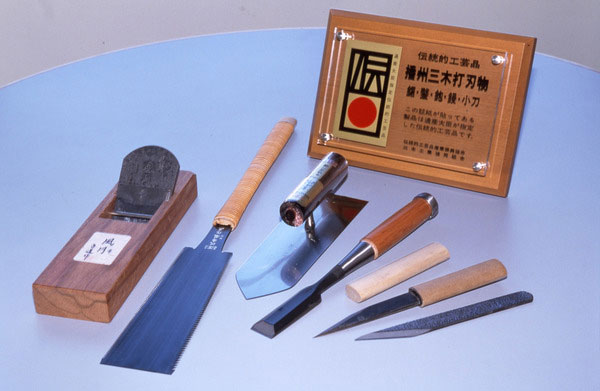 The forging which is said to be the beginning of Banshu Miki Uchihamono, started about 1500 years ago. It originated when Korean blacksmiths from the ancient Korean kingdom Paekche settled around the former Miki city where they exchanged skills with the Japanese blacksmiths. But Banshu Miki Uchihamono was established quite later in history. It is said that, the foundations of this traditional forging technique were established in the Edo period, and it was at this time that the crafts called Banshu Miki Uchihamono were born and developed into the form we know today. According to historical documents, it was in 1763 that the production of wide-bladed ripsaws was started and signs of the industry’s development were seen in Miki. In 1760, Edo (current Tokyo) was devastated by a large fire, creating a demand for reconstruction timber, and a consequent temporary demand for axes, saws and the like. However the history and survival of Banshu Miki Uchihamono has not always been so easy; the industry has faced several difficulties over the years, such as the loss of its exclusive distributorship in Osaka in 1792; and the rapid decrease of demand for traditional forging due to the introduction of western techniques around 1885. Despite such setbacks, the skills of Banshu Miki Uchihamono have been continuously passed down through the efforts of generations of craftsmen.