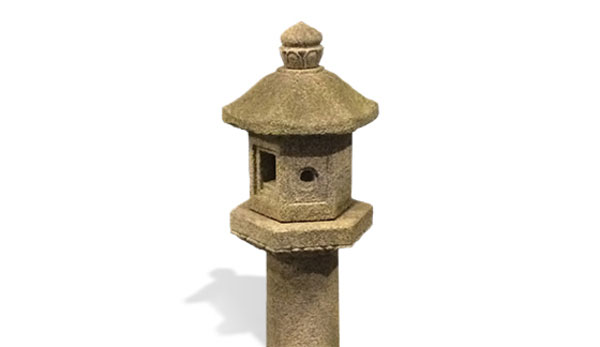 What is Kyo-ishi craft ?

Kyo-ishi Craft called Kyo-ishi Kougeihin in Japanese, are stonework and gem carvings produced in and around the cities of Kyoto and Uji, in the Kyoto prefecture. Abounding in quality granite from the village of Kitashirakawa at the foot of Mt. Hiei, this well-endowed environment made Kyoto a favorable place for stonework production. Kyo-ishi crafts have been cherished in the best Japanese gardens and guest houses in Japan up to today. It is characterized by its traditional start-to-finish production in which all the processes are carried out by a single mason. Only artisans with prodigious techniques and a finely honed aesthetic sense nurtured in the culture of Kyoto have been eligible to produce stone lanterns, multi-story pagodas, and garden ornaments such as pots, while refining the techniques of Kyo-ishi craft. The designs engraved on the surface of the stones are so exquisite that their expression can change with a slight difference of strength, which represents the sophisticated stone carving techniques among masons in Kyoto.

It is said that stonework started in the late Nara period (710-794), but actually the transfer of the capital from Nara to Heian (ancient name of Kyoto) in 794 spurred the development of the art of stonework in Kyoto because a number of stone crafts were needed in order to build the capital. Stone Buddha statues, stone pagodas, stone lanterns and other stone crafts were produced for the construction of temples and shrines in step with the widespread adoption of Buddhism from the Heian period (794-1185) to the Kamakura period (1185-1333). As a cultural center, Kyoto allowed various traditional crafts to reach a higher level of sophistication even after the Kamakura period while delivering elaborate and beautiful stonework through subtle techniques. The tea culture flourished in Kyoto during the Azuchi Momoyama period (1573-1600), which exerted a profound influence on stonework and popularized stone lanterns as a decoration in Japanese gardens. Harmony between the beauty of tea ceremony and stonework enhanced the traditional stone carving techniques.