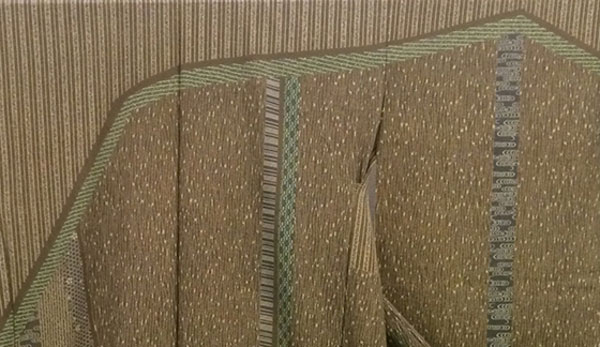 Kyo Komon are fine-patterned textiles produced in Kyoto prefecture. Kyoto, a historical center of dyed textiles, is renowned for its superb fabrics resulting from exceptional dyeing and stencil making. This craft has beautifully elegant colored patterns and can be traced back to about 1200 years ago, when the stencils for dyeing were first made. Originally, the term komon specifically referred to the monochromatic stencil-dyed fine-patterns on kamishimo or the samurai ceremonial dress of the Edo period (1603-1868). During this period, hakama (wide-legged pleated trousers) made with komon-dyed linen was standard formalwear for samurai. Among the general public, especially merchants, a free, fashionable culture developed and stylish komon kimono came into fashion. The originally monochromatic komon blossomed into multi-colored designs with many variations. As Kyoto is known for two distinctive dyeing styles, Kyo Yuzen and Kyo Komon, they have influenced each other over time, and this helped Kyo Komon develop its own unique style. The design patterns and color combinations of Kyo Komon are extremely elegant and refined. In recent years, there are more modern designs and the traditional production methods are used in small items like bags and clothes.

The origins of Kyo Komon are thought to date back to the creation of paper stencils about 1200 years ago with the term komon referring to the fine-pattern stencil dyeing of kamishimo worn by samurai. After the Onin War (1467-1477) during the Muromachi period (1336-1573), a wide variety of silk fabrics were produced. Centering around the area of Horikawa in Kyoto, dyers established an artisan town, and Kyo Komon gradually developed from this town. In the Sengoku period (1467-1568), both Ieyasu TOKUGAWA and Kenshin UESUGI, two of the most powerful feudal military leaders of the time, were reputed to wear Kyo Komon. When komon-dyed linen hakama trousers became a formal attire for samurai in the Edo period, it became fashionable for townspeople to wear komon kimono as well. Influenced by Kyo Yuzen, a textile from the same production center, Kyo Komon developed its unique style that is quite different from those in other komon production areas. Compared to Edo Komon, this craft has more figurative patterns and is dyed with many vivid colors. The traditional production methods are still applied, using Japanese traditional paper for making stencils and rice paste for resist dyeing.