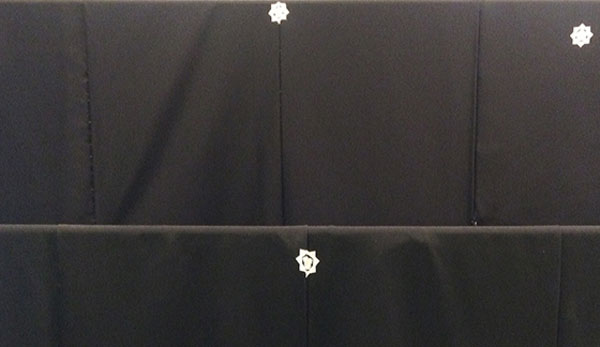 Specialty of Kyoto – beautiful, lustrous and graceful black
A black gemstone created by the great skills and patience of the craftsmen

Kyo Kuromontsuki Zome is a dyed fabric produced in the areas including Kyoto city and Kameoka city in Kyoto prefecture. The characteristic of Kyo Kuromontsuki Zome is its high quality and graceful black color. The kimonos that are worn for funerals and weddings are referred to as the Kurotomesode, and Kyo Kuromontsuki Zome is worn for such special occasions. The base fabric is made from silk. Although chemical dyes are used to bring out a refined black color, safflower dye or indigo dye which have been used from ancient times are used in the Kurohikizome method, which is dyeing the fabric with two different kinds of dyeing methods, or the Kuroshinsen method is used to dye the fabric. A family crest is created precisely and beautifully using the techniques of the traditional craft. The family crests are placed on the fabric to show the name or the family of the person who is wearing the kimono. There are more than 20,000 family crests. Approximately 4,000 of them that are in the Heian Monkan, a book of the collection of popular family crests in Japan, are generally used, and these family crests are drawn by hand or printed using a paper pattern.

The history of Kyo Kuromontsuki Zome goes back to the 10th century and the Kurozome is said to have been established around the 17th century. The technique was used to make robes for the Buddhist priests and the formal wear for the samurai families. People started wearing haori (a short coat for a formal kimono) and hakama (a divided skirt for men) made with Kyo Kuromontsuki Zome for special occasions including funerals and weddings in the Meiji period (1868 – 1912), so the demand for Kyo Kuromontsuki Zome increased since that time. The Kurozome industry in Kyoto has kept the top position as a traditional national craft although American and European culture was brought in and spread widely after World War II. During the peak of the Kurozome industry between 1902 and 1903, generally, four different dye liquids were used: dye extracted from sumac gallnut, Myrica bark, betel nut and iron. The iron dye was also used for dyeing teeth. The dyeing process was repeated 18 times or more to dye one roll of fabric. However, chemical dyes became popular in the Taisho period (1912 – 1926), and the Kurohikizome method was used, but the Kuroshinsen method using chemical dyes became more popular. In the meantime, the dyers who were specialized in Aizome (indigo dyeing) also had to change their dyeing method to the Kuroshinsen.