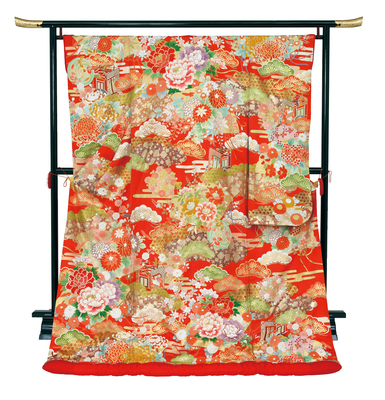 What is Kyo textiles ?

Kyo textiles are dyed textiles made throughout Kyoto prefecture that feature a wide range of vivid colors and a technique of pictorial designs of animals, nature and daily items called yuzenmoyo.
The dyeing method is very unique as artisans put glue around the outlines of the patterns to prevent the color from running and getting mixed up with the other patterns. Since this traditional handwork is an intensive and expensive labor, another simplified technique has more recently become popular.
Besides Kyo textiles, another pattern dyeing style called Kaga textiles from the Ishikawa prefecture is also well known for its splendid five color palettes, Kaga gosai. However Kaga textiles does not indulge itself in the rich embroidery and gold leaf decoration like Kyo does.
This splendid Kyo textile is a beautiful production by the elegant and sumptuous culture of Kyoto and it is popular not only in Japan but all over the world.

During the Edo period (1603-1868), a famous fan painter named Yuzensai MIYAZAKI established a new style of dyeing method called Kyo yuzen (Kyo textiles in Japanese). The technique of pattern drawing on a folding fan is believed to be the inspiration behind Kyo textiles.
Generally speaking, the history of dyeing dates back to the Nara period (710-794), at the dawn of Japan's culture, and since then it has continuously developed to another form of dyeing like batik (resist dyeing).
In the early Muromachi period (1336-1573), the luxurious sarasa (chintz in English) and gold foil embroidery dyeing methods were incorporated which built up the original dyeing culture of Kyoto and established it as a noteworthy region.
In the mid-Edo period, brilliantly colorful and pictorial kimono gained popularity among the chonin (rising middle class), and yuzen dyeing became a huge trend. It is believed that, in those days, the different dyeing techniques and skills were combined, resulting in the current dyeing method.
With the introduction of chemical dye during the Meiji period (1868-1912), a technique of mixing the dye with paste to make a colored dyeing paste was developed. The colored dyeing paste was applied during the yuzen dyeing process of tracing designs from paper patterns. Jisuke HIROSE was a key innovator of this new technique and he helped further advance the art of yuzen dyeing.