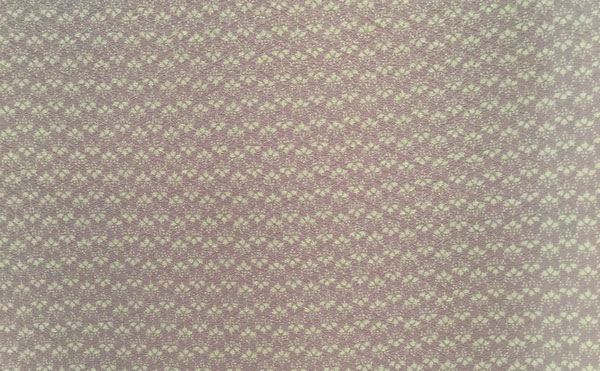 What is Tokyo fine-patterned dyeing ?

Tokyo fine-patterned dyeing (called Tokyo some komon in Japanese) is a stencil dyed textile produced in different wards of Tokyo like Shinjuku and Setagaya. It was designated as a traditional national craft in 1976.
This textile can seem plain from afar, however, when examined up-close there are delicate geometric designs. Komon means fine patterning and two types of this craft are Edo komon and Tokyo oshare komon. The former uses monochromatic, fine patterns, while the latter has much larger, multicolored designs, but both use handmade Japanese paper as a stencil when dyeing.
The main patterns of this craft include same komon (shark pattern as it looks like fish scales), kakudoshi komon (grid pattern), gyogi komon (diagonal line pattern) and gokusame komon (finer version of same komon). In general, the quality of the product is higher when the pattern is finer.
This craft is a type of stencil dyeing that uses backing paper made through pasting together several sheets of traditional Japanese paper. An experienced carver meticulously cuts a pattern into the backing paper. Then, the process of handcoating starch on the textile is done by a dye artist.

Komongata zome is a stencil dyeing technique that has existed since the Muromachi period (1338-1573) but became popular in the early Edo period (1603-1868) when samurai started to use it for ceremonial dress.
Feudal lords called daimyo had their castles in Edo (now Tokyo) and each clan had a personal pattern. Therefore, the demand for this craft increased and the designs used for the lords' clans became traditional patterns of the craft. Although initially only feudal lords wore Tokyo fine-patterns, commoners started wearing this craft midway through the Edo period and a wider variety of chic patterns developed, including designs with animals, plants, seven gods of good fortune, or treasure patterns. As more variations of designs became available, the demand for Tokyo fine-patterned dyeing increased.
A law enacted at the beginning of the Meiji period (1868-1912) required samurai to cut their topknot. This was followed by a rapid change to Western dress and a significant decline in men wearing Tokyo fine-patterned kimono. However, the amount of women wearing fine-patterned kimono also increased.