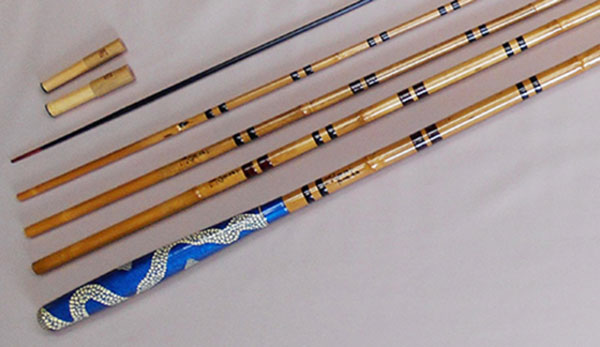 Traditional techniques of Edo
Make long-lasting items loved by all

What is Edo bamboo fishing rods ?

Edo wazao are fishing rods that are produced in the Kanto region, mainly Tokyo and the prefectures of Chiba and Saitama. This craft is named after the Edo lineage of the craftsmen and not the production area of Edo (now Tokyo).
It is made from several different types of bamboo enabling production of a wide variety of rod types for catching fish. By assembling different combinations of bamboo types such as hoteitake, yadake, hachiku, and madake, a assortment of rods can be made to perfectly suit different fish, fishing techniques, and water conditions. Jointed rods allow easy repair or replacement of a broken section and give longevity to the rod. Natural lacquer is applied, making the rods both durable and exceedingly beautiful. During the Edo period (1603-1868), feudal lords who were hobbyist fishers competed with each other over having beautiful decoration. Also, various workshops have developed their own signature decorative finishes.
Maintenance of rods is simple as after wiping mud and water, they just need to be polished with a dry cloth and dried in the shade. These sturdy, light, and attractive rods can be used for many years.

The technique of making jointed rods was developed in the middle of the Edo period. In 1788, Taichiya TOSAKU opened his Edo wazao workshop near Kotokuji Temple in Ueno, Tokyo. Later, his apprentices left to become independent, and current craftsmen can trace their ancestry back to that era. The city of Edo is blessed with a large shallow bay and fishing rivers that were enjoyed by local people. Especially during the whiting fishing season of May and June, seeing anglers sit on top of their stepladders in the shallow bay was common. Each season had its favored fish species, which presented distinct challenges to the anglers and required numerous rod types.
To increase their durability, lacquer was applied to the Edo wazao but the results were so attractive, that further decoration was applied. By the late Edo period, these humble fishing rods had reached the level of artistic craft. Afterward, from the 1930s until the late 1940s, fishing rods decorated in a Western style were produced. During the postwar era, the crafts were popular as souvenirs for the occupation forces and the industry peaked. However, with the advent of fiber glass and carbon rods, demand for the traditional Edo wazao has decreased and with a shortage of successors, many workshops have disappeared. In recent years, increasing numbers of people are appreciating the supple and beautiful handmade rods produced by master craftsmen.