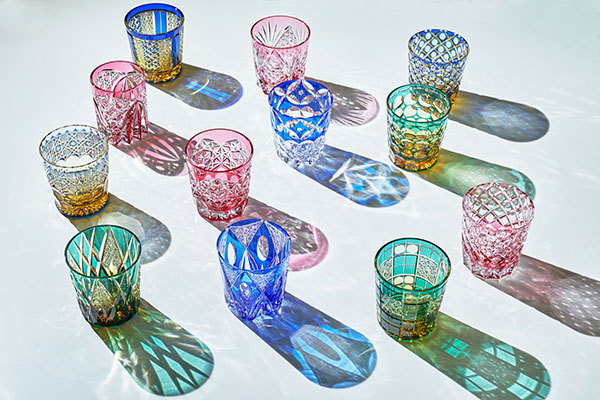 Traditional glass from Tokyo
A feast for your eyes and fingertips

What is Edo kiriko cut glass ?

Edo kiriko is the most famous glass craftwork in Japan. It was originally produced in the city of Edo which was Tokyo's name during the Edo period (1603-1868). Kiriko means "cut glass" so its name means "cut glass from the city of Edo". Edo kiriko sake glasses and other types of glassware are still popular today.
Originally, patterns were cut on a transparent and colorless glass surface. However, new techniques were introduced during the Meiji period (1868-1912), when Japan first opened its doors to the outside world after having isolated itself for over 200 years. The style of Edo kiriko made with colored glass started being produced in large quantities during this time. Today, Edo kiriko is known for its intricate designs cut into blue, red or other colored glass. The most typical design is called nanako or fish eggs because it is composed of numerous fine straight lines that resemble round fish eggs. However, a closer look reveals the design is actually composed of many small squares arranged side by side. Other quintessential Japanese designs include plants such as chrysanthemums or hemp leaves. 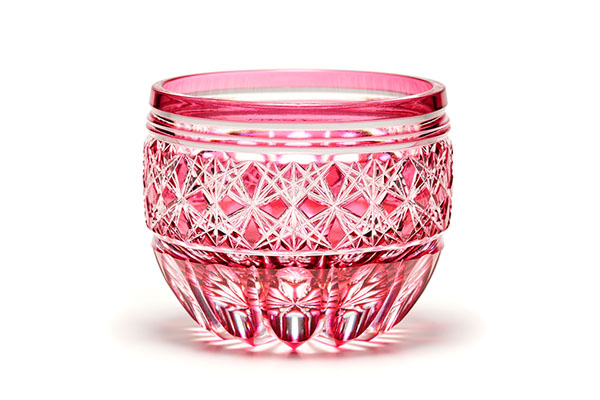 Edo kiriko is considered to have begun in 1834 in the late Edo period (1603-1868), when Kyubei KAGAYA, the owner of a glass wholesale firm in Edo, first tried to design a glass using emery powders.
During the Meiji period (1868-1912), as part of the government's policy of promoting Japanese industrialization, a modern glass factory was constructed, and in 1881, the government invited Emmanuel HAUPTMANN, a British cut glass engineer, to Japan. He taught his knowledge and techniques to the Edo kiriko artisans, which led to British cut glass technology merging with Edo kiriko techniques.
Furthermore, another famous cut glass style called Satsuma kiriko stopped its production at the end of the 19th century, resulting in many unemployed craftsmen migrating to Edo with their Satsuma kiriko traditions. Their technique of using color coated glass was soon absorbed into the production of Edo kiriko.
From the Taisho period (1912-1926) through the early days of the Showa period (1926-1988), cut glass was called wa glass (meaning "Japanese-style glass"). It became extremely popular and was used for drinking glasses, tableware or lamp shades. The main manufacturers of Edo kiriko were founded in the beginning of the 20th century and are still active today.