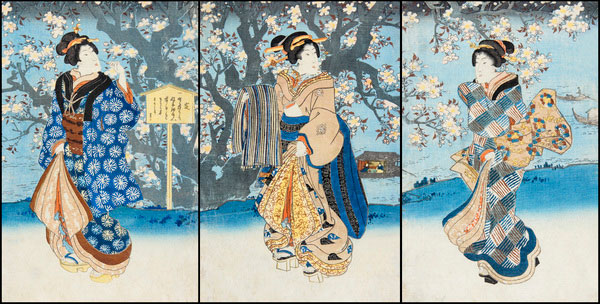 What is Woodblock prints ?

Woodblock prints became popular in Japan during the Edo period (1603-1868) when the techniques were developed and refined, which contributed to spreading beautiful printed art forms such as ukiyoe (a genre of Japanese art). Woodblock prints are called Edo mokuhanga in Japanese, mokuhanga meaning "woodlock prints". Edo is Tokyo's former name.
The woodblock print production process usually requires an artist, a wood carver, and a printer to jointly create one piece of work for a publisher.
Paintings are often expressed using pigment colors while woodblock prints are expressed by a combination of fiber colors of Japanese traditional paper (washi) and pigment colors. The wooden blocks are made of hard cherry wood as it has a fine grain ideal for carving details and it is durable enough for printing hundreds of copies of a print.
The paper used is a handmade fine quality Japanese paper called kizuki hosho because it has a soft thick texture, but is strong enough to withstand multi color printing, making it ideal for woodblock printing.

It is said that the late Edo period (1603-1868) is when woodblock prints and their techniques were first established. Simple woodblock printing techniques already existed in the Asuka period (592-710) but they were not developed to the current form of woodblock prints until the late Heian period (794-1192).
At first, a technique of monochrome printing using only black ink (called sumizuri e) had religious themes mainly with Buddha figures. However, the prints started to be used for comical novels or commercial news flyer, which were popular amusements for the general public during the Edo period.
Around 1744, woodblock printing techniques further improved with the development of a new technique. It consisted in adding red or green highlights by a hand printing called benizuri e. This was the first step towards to the multi-color printing of the Edo period. However, there were problems in developing the techniques to prevent the misalignment of woodblocks and creating other colors beside red and green.
It was 1764 that multi-colored printing technique was finally established by Jinshiro OKUBO and Sanemon KOMATSUYA. It became popular with high demand in the following year under the name of nishiki e by the influence of remarkable work done by Harunobu SUZUKI, who is regarded as the founder of nishiki e. Finally, multi-color woodblock printing became a significant part of the mass culture of Edo and many artists were attracted to the medium resulting in the prolific production and sales of woodblock prints.