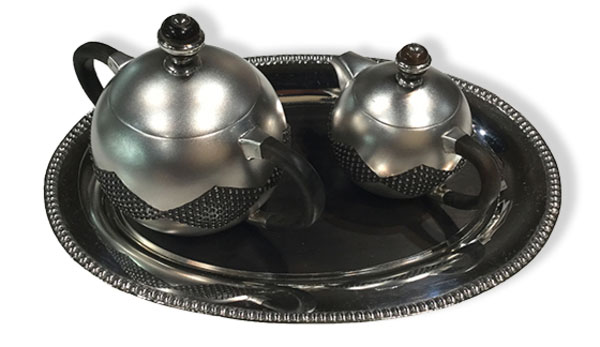 Radiant, chic and deep articles
created with diligence and rigor

What is Tokyo silverware ?

Tokyo silverware (called Tokyo ginki in Japanese) is a form of metal handicraft produced mainly in different wards of Tokyo like Taito, Arakawa, and Bunkyo. It is a traditional craft that has been passed down from the Edo period (1603-1868), and even today there are artisans called tankinshi, choukanshi and shiageshi that use the same techniques. Silver is used as the main raw material, and there is a wide range of products including tableware, ornaments, ear picks, and personal accessories. Cutlery is also produced, such as baby spoons and pastry knives, as it is safe and long-lasting.
Notable features of Tokyo silverware are its elegant sheen specific to silver and chic appearance. Most of the steps involved in its production require diligent work and artisans make use of various techniques to produce unique pieces. Also, silver reacts with sulfide gas in the air to produce a sulfurization phenomenon where it gradually loses its luster. The different color tones that result from a finishing method known as furubi, which produces an antique-style feeling using this phenomenon, are another of the silverware's charms.
Tokyo silverware remains popular thanks to the refined style of the artisans' techniques and is used for an array of gifts and souvenirs, in addition to items for daily use.

Silverware in Japan has a long history, as the names of silver tableware and drinking vessels are written in the Engishiki which is a book about laws and customs from the 10th century. Silver in Japan was a precious resource and can be traced back to before there were numerous mines, like the Iwami Ginzan Silver Mine located in Shimane prefecture. Many high quality silver pieces remain among the treasures found in Horyuji Temple, Nara prefecture. The Horyuji treasures consist of over three hundred valuable objects, and can be dated to the 7th and 8th centuries.
During the Edo period, there were silverware artisans called shiroganeshi, and artisans of decorative products known as kinkoshi, who created a wide range of items. Silverware and silver tools are said to have been popular among merchants back then. Japan's silverware was exhibited at the International Exposition in Paris in 1867, interesting people from around the world in the techniques and unique ideas behind Japanese silverware. Then, with the introduction of European techniques, silver products with an even more diverse range of appearances started being produced. With an increased amount of foreign travel to Tokyo after WWII, there was higher demand by Americans for silverware as souvenirs. Then, new products were introduced and even today people are fascinated by Tokyo silverware.