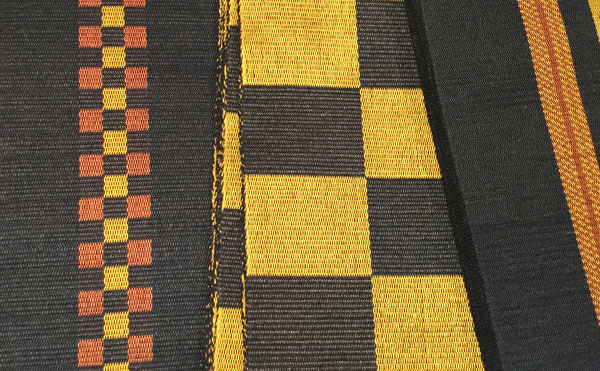 What is Hachio island silk ?

Honba Island Silk (called Honba Kihachijo in Japanese) is produced on Hachijojima Island in Tokyo. The name of this craft derives from a silk fabric with stripe and check patterns mainly dyed in bright yellow called kihachi. Patterns mainly dyed in black are called kurohachijo, and those that are dark yellowish red, or birch color, are called tobihachijo.
Honba Kihachijo's distinctive feature is that it is handwoven in three colors, yellow, black and reddish yellow by proficient artisans. They have unique dyeing techniques called fushizuke, akutsuke, and dorotsuke where they only use three colors, yellow, black and dark yellowish red. The three colors are believed to have been the only plant-dyes that could be obtained in the harsh natural environment of Hachijojima Island. Honba Kihachijo uses plants and trees indigenous to Hachijojima Island for dyes; a yellow color dye, the origin of Kihachijo, extracted from jointhead arthraxon, a dark yellowish red color dye from the bark of Japanese bay tree commonly called madami on the island, and a black color dye from the bark of Japanese chinquapin.
To dye the threads brightly and prevent color fading, it is essential to use a mordant made from mud or lye from camellia and Japanese cleyera leaves. Following thread feeding and warping, the dyed threads are hand-woven with a takahata loom to produce a subdued, plain or plaid textile with gracefulness. Plaid patterns in Honba Kihachijo are traditional patterns of Hachijojima Island.

The silk fabric in Hachijojima Island, the origin of Honba Kihachijo, is said to date back to the late Heian period. The fabric traveled inland from Hachijojima Island in the Muromachi period to pay land tax with, instead of crops, which is believed to be the beginning of Honba Kihachijo weaving. Paying tributes with the fabric continued through the Edo period, and until 1909 when the tax system of paying with crop yield was changed into that of paying taxes in cash. High-quality Hachijojima Island silk fabrics were worn only by feudal lords and aristocrats in the inner palace at first. As time went by, they grew popular among commoners. Believed to avoid impurities, the color of yellow was worn as an amulet to keep evil spirits away and protect them from any harm. It is said that plain yellow Hachijo fabrics were especially popular among doctors, which made the fabrics high-value and difficult to obtain. The initial fabrics were plain yellow or white which was known as Hachijo silk. The adoption of birch and black color dyes allowed weaving striped and checked cloths which were called Hachijo stripes. In 1977, Honba Kihachijo, an exquisite textile hand-woven by women in Hachijojima Island that supported the economy of the island as a specialty product, was designated as a national traditional craft.