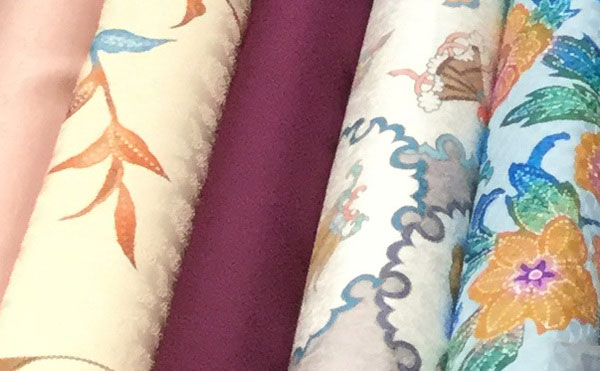 What is Tokyo textiles ?

Tokyo Tegaki Yuzen refers to kimono woven fabric produced in Shinjuku Ward, Nerima Ward and Nakano Ward, Tokyo. With an outgrowth of townsmen culture in Edo (current Tokyo), it is characterized by its consummate expressions of the Edo idea of stylishness in soft, subdued tones.
Unlike other Yuzen fabrics, Tokyo Tegaki Yuzen adopts integrated production in which the whole process is performed alone, allowing an artisan’s individuality or characteristics to show through. It shares the production process with Kyo Yuzen and Kaga Yuzen, except for a step of pattering with a mold. As “Tegaki” means “hand painting” literally, Tokyo Tegaki Yuzen enjoys hand-painted patterns without using molds. Its signature designs include Edotoki pattern, Goshodoki pattern and Yusoku pattern. Today, Tokyo Tegaki Yuzen have started developing modern designs and colors besides Edo stylishness.

At first, a technique of monochrome printing using only black ink (called sumizuri-e) had religious themes and mainly depicted Buddha figures, but it was in the Edo period (1603-1868) that the prints started to be used for comic novels or commercial newssheets, which were popular amusements for the general public.