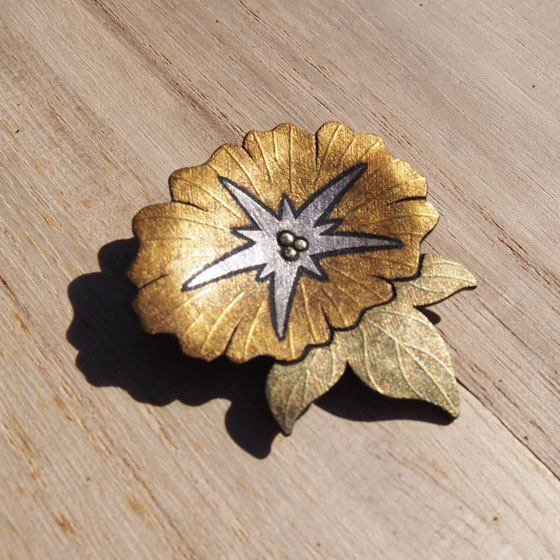 What is Higo inlays ?

Higo Zogan is inlaid metal work produced in Kumamoto, Kumamoto prefecture. This craft was formerly used to adorn the gun barrels or sword guards of samurai. Today, however, the skills are used to make personal accessories or interior ornaments. The characteristic features of Higo Zogan are its simple dignified beauty and refinement, the quintessence of samurai culture. The beauty of the gold and silver design inlay is in contrast to the somber deep black base; a perfect balance giving each piece a restrained elegance. Higo Zogan involves several techniques such as the more commonly used nunome (meaning like a woven mesh) inlay or the less used horikomi (engraving) inlay. In nunome inlay, many intersecting fine lines resembling a woven fabric are engraved into the iron base surface, onto which gold or silver metal shapes and designs are inlayed. Traditionally, Higo Zogan does not use any paint on the base metal, and relies on creating a deep black color by allowing the natural process of rusting to bring out the beauty of the iron base metal. Other traditional techniques developed over the centuries make use of the thickness of gold and silver, and nunome chisel cuts that are made from four directions (vertical, horizontal, and diagonals), along with design motifs handed down in the Higo region to ensure the characteristic dignity and refined beauty of this craft. 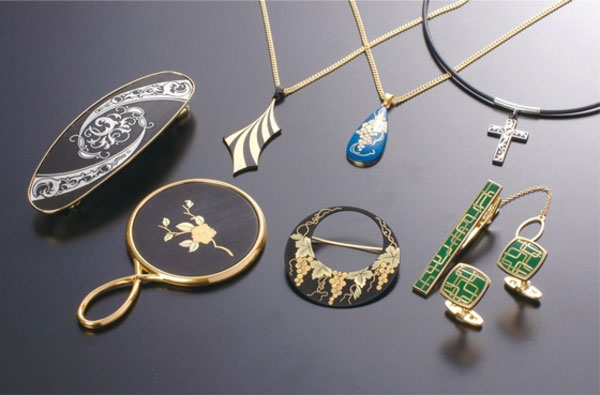 Matashichi HAYASHI, a gunsmith in the beginning of the Edo period (1603-1868) is considered to be the founder of Higo Zogan. At first, he served Lord Kiyomasa KATO, but after the Kato family fell from grace in 1632, he worked for Lord Tadatoshi HOSOKAWA, the new lord of the Higo domain. After mastering the nunome inlay techniques in Kyoto, he began applying inlay patterns such as the nine-planet crest, kuyomon, or cherry blossom crests. Later on, Hayashi’s outstanding inlay techniques were used to make numerous fine articles, and became the roots of traditional Higo Zogan. Although Tadatoshi HOSOKAWA was the lord of the domain, his father Tadaoki had an enormous influence on the development of Higo Zogan. Tadaoki had a taste for elegance and refinement, in the pursuit of which he employed master artisans, such as Hikozo HIRATA, a blacksmith, and encouraged professional rivalry in the production of sword and metal fittings and the development of metalwork skills. In this way, under the patronage of the Hosokawa family, Higo Zogan developed its increasingly refined techniques along with the rise and prosperity of the samurai in society. In the closing days of the Tokugawa Shogunate, Rakuju KAMIYOSHI, who was considered a second Matashichi HAYASHI, enabled Higo Zogan to hold an established position in the world of metalwork. Unfortunately, with the Meiji Restoration and the law banning the wearing of swords, the demand for sword metal fittings disappeared overnight and Higo Zogan suffered a crippling blow. Even so, by using the techniques to make accessories and tea utensils, the industry found a way out of its difficulty, and these traditional techniques have been handed down to present. 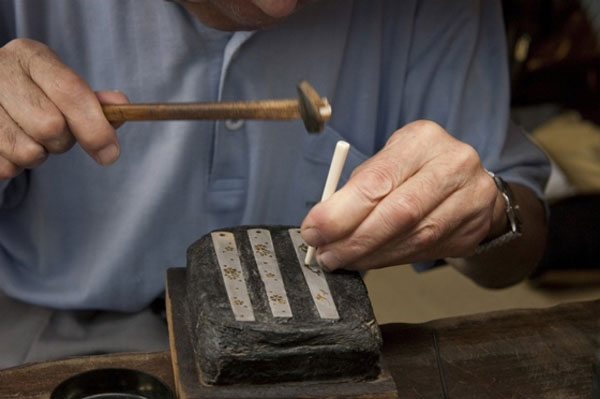