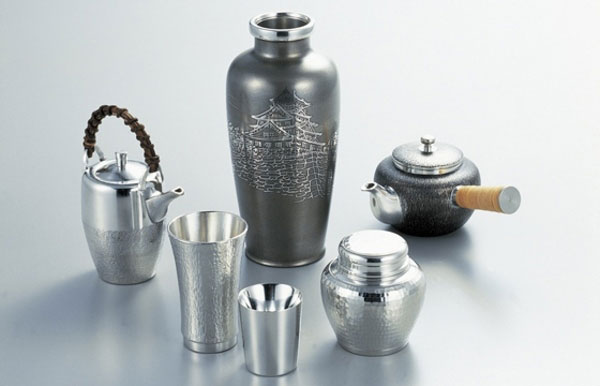 What is Osaka naniwa pewterware ?

Osaka naniwa pewterware (called Osaka naniwa suzuki in Japanese) is a metalwork produced in and around the city of Osaka, Osaka prefecture. In the past, tin mined in Japan was used, but today it is imported mainly from Thailand and Indonesia. This craft has subtle differences even between pieces made by the same craftsman, because each piece is completely handmade as tin is a relatively soft metal and difficult to process by machine. Tin is a very stable and durable metal. It is said that tin mellows the taste of sake, resulting in the production of beautiful sake drinking sets as well as flower vases. The hand-engraved concave-convex patterns inside a beer mug generates longer-lasting beer foam, and the rim with a certain thickness gives a smooth and pleasant feeling when drinking. Products such as tea canisters are turned on a lathe. The highly precise cutting using a lathe gives products an airtightness that prevents moisture and oxidation, which is particularly ideal for preserving tea.

The history of tinware production dates back to the Asuka period (538-710). Some tin pieces can be found in the Shosoin Repository*. Tin used to be valued like gold and silver and was only allowed in limited settings such as for Imperial court dinnerware and ritual articles. A document called Jinrin-kinmouzui references the existence of tinware craftsmen in Kyoto and the Kansai region in the early Edo period (1603-1868). According to a document called Naniwa-suzume, production of tinware in Osaka began in 1679, and by the mid Edo period, tinware was produced in Kamigata (Osaka, Kyoto, Nara, Shiga and Hyogo) where distribution functions were good. In and after the mid Edo period, this region became the largest production area in Japan, and around the end of the Taisho period (1912-1926), there were close to fifty tinware manufacturers and over three hundred artisans. However, upon the start of World War II, many craftsmen were drafted for military service and obtaining material became difficult, resulting in a production crisis. While Osaka naniwa pewterware underwent difficult times, it was able to revive production and be recognized by the Minister of International Trade and Industry in 1983 as a traditional craft.                                                                       *The Shosoin Repository is a building located in Nara, a former capital of Japan, that has been around since the eighth-century. It not only has a collection of treasures dating back to the Silk Road, it also preserves over 10,000 hand-written documents all dating from the Nara period (710–784). Today the repository is under the control of the Imperial Household Agency.