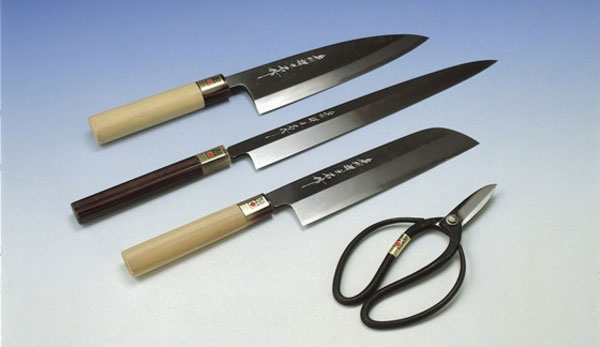 High quality products and traditional techniques
made by first-class artisans

What is Sakai cutlery ?

Sakai traditional blades are hammer-forged knives produced in the cities of Osaka and Sakai, Osaka prefecture. To achieve both strength and cutting quality, this craft is made by combining soft iron and steel.
This craft is forged to have a sharp keen-edged blade. In recent years, the production of kitchen knives stamped out from a steel plate with a sharpened edge section has increased. In contrast, Sakai traditional blades are made by hammering two different types of metal, soft iron and steel, and finishing to a final blade shape. Knives forged in this traditional way have excellent solidity and a long lasting sharpness.
The production of the knives can be broadly divided into three distinct production processes: blacksmithing, sharpening, and attaching the handle. To maintain the highest quality, the work is distributed between these three stages. There is a broad range of knife shapes and sizes according to intended purpose. It is said that more than 90% of knives used by chefs in Japan are Sakai traditional blades.

In and around the city of Sakai, there is a large number of ancient tumuli or burial mounds including the Daisen Kofun, a large key-hole shaped mausoleum of Emperor Nintoku, believed to have been constructed in the Kofun (Tumulus) period (300-538). Considerable amounts of spades, hoes, and tools were manufactured to enable such massive engineering works of burial mounds. The blacksmiths who produced the tools established a settlement in Sakai and continued cultivating their craft to make tools and swords.
In 1543, the Portuguese brought guns and tobacco to Japan. Sakai, with its trained metal workers, became a major center for the manufacture of firearms, especially toward the end of the Sengoku period (1467-1568), a time of social upheaval and near-constant military conflict. With the start of the comparatively stable Edo period (1603-1868), the demand for firearms decreased, but smoking became popular, creating a demand for tobacco leaf cutting knives. The tobacco knives made by the craftsmen of Sakai were of high quality and considered better than imported knives. The quality of these knives led the Tokugawa shogunate (feudal military government) to stamp them with the Sakai Kiwame mark and create a government monopoly. The excellent reputation of the Sakai traditional blades soon spread throughout Japan.
Later with the mechanization of tobacco production, the demand for tobacco knives dropped, but craftsmen shifted to the production of cooking knives and gained lots of support from professional chefs.