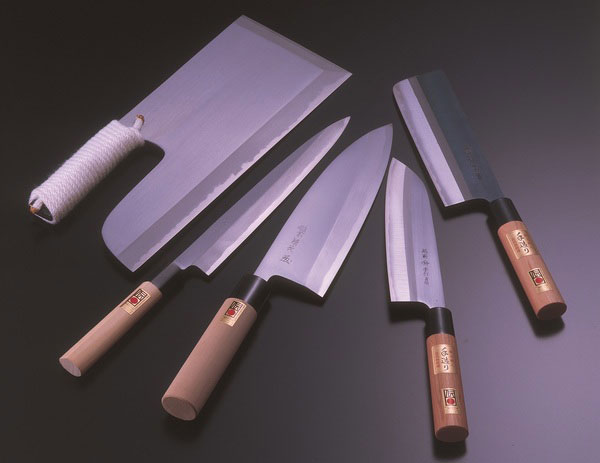 What is Echizen cutlery ?

Echizen cutlery (called Echizen uchihamono in Japanese) is produced around the city of Echizen, Fukui prefecture. A double layering technique is used for knives and a rotated steel joining technique for sickles.
Double layering is a forging method where two blade plates are layered and hammer beaten on both sides. Since the thickness of the blade is doubled by layering, a lot of forceful hammer beating is needed to effectively stretch and thin the knife blade. In addition, double layering prevents any drops in temperature while heating. This removes the need for repeated heating and results in less unevenness on the blade surface.
The rotated steel joining technique involves beating steel into a diamond shaped blade edge by starting from the corner across the whole blade. This technique results in a thin, sturdy, and easily-sharpened sickle blade which stays sharp for a long time. 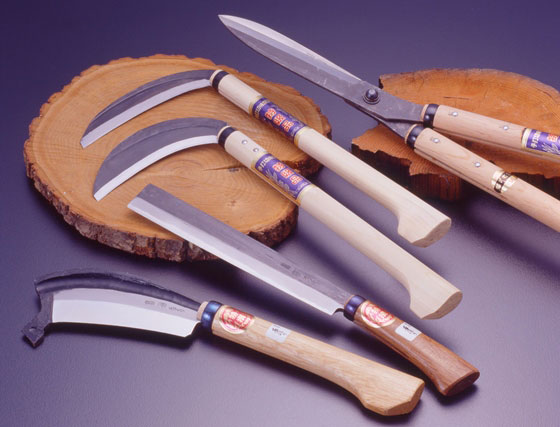 The origin of Echizen cutlery is said to date back to the first half of the 14th century when CHIYOZURU Kuniyasu, a swordsmith in Kyoto, relocated to the Echizen area. He crafted swords along with sickles for the farmers in the area, which has been known for its agricultural tool production ever since.
During the Edo period (1603-1868), a blacksmiths merchant guild was organized under the patronage of the Sendai domain (present day Miyagi prefecture). In addition, collectors of Japanese lacquerware, familiar with the quality of the blades, sold hammer-forged sickles to supplement their income and took orders for blades from all over the country, as they had been traveling far and wide looking for lacquer trees. When the Meiji period (1868-1912) started, the merchant guild lost the backing of the Sendai domain and was dissolved. This did not slow growth as in 1874, Echizen sickles still accounted for nearly thirty percent of national production and knives for about twenty-five percent. Until the Showa period (1926-1989), the development of the silk industry increased the demand for mulberry cutting sickles and knives which ensured the stability of the Echizen cutlery industry.
Over the generations, Echizen cutlery artisans have maintained traditional hand-finishing techniques and produce a range of quality products, mainly knives, sickles, billhooks, and trimming shears. 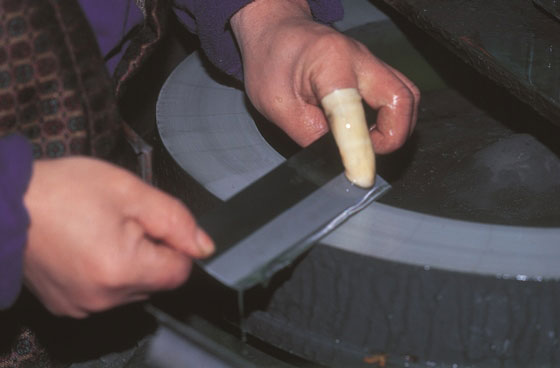