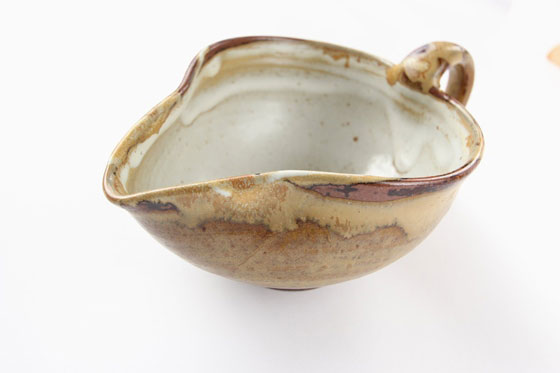 400 years of history:
simple but strong and bold pottery

What is Shodai ware ?

Shodai ware (called Shodai yaki in Japanese) is a form of pottery baked mainly in the northern part of Kumamoto prefecture.
This craft is distinguishable because of its simple texture, strong form, and bold design, which is due to the pouring method of applying enamel. Shodai clay with high iron content is used as the potter's clay, which is covered with dark reddish-brown enamel, but its characteristic design is produced by pouring differently colored enamels like yellow and white. These are produced from the ash of straw or bamboo grass. There are three color groups depending on differences in the mixture of enamel: blue, yellow, and white. Shodai ware has also been called gotoku-yaki, which means "five virtues", because it does not corrode, does not transmit odor, is protected from moisture, has antibacterial effects, and a long life span. This is why Shodai ware has become popular not only for tea utensils, but also as practical tableware for daily use.

Shodai ware is said to have started in 1632, when Tadatoshi HOSOKAWA, head of the Hosokawa clan, took up a new post alongside potters Genshichi and Hachizaemon. He started baking earthenware in a kiln opened at the base of Mt. Shotai. As the official kiln of the clan, it used to serve for baking items for daily use which were mainly tea utensils and hibachi (earthenware indoor heating pot). Then, due to the domain's policy of promoting industry as well as the backing of the Hosokawa family, the Senoue kiln was established in 1836 by Rin-emon SENOUE, a government administrator. As a result, the number of pottery operations increased and developed as the Shodai ware techniques were inherited. However, as the Meiji period started (1868-1912), the rise of Arita ware and Seto ware led to a period of decline for Shodai ware as the kilns were abandoned in succession. From the Showa period (1926-1989), Chitaro CHIKASHIGE and Heijiro JOJIMA made efforts to revive Shodai ware, and so it returned to the limelight.
Since then, the number of Shodai ware kilns around the base of Mt. Shotai has increased. Today there are twelve locations producing this craft.