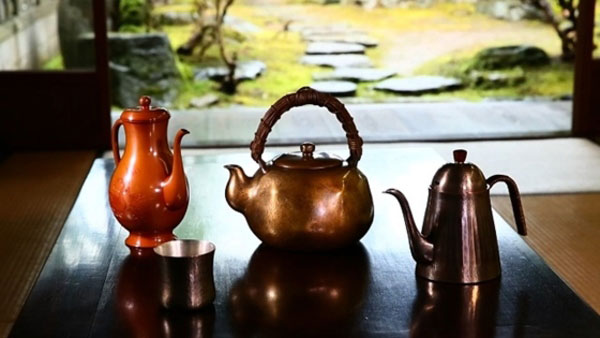 Tsubame Tsuiki Coppereware are metalwork made in an area around Tsubame City, Niigata Prefecture. As traditional craftwork originating in the mid-Edo Period, Tsubame Tsuiki Coppereware have been produced in the form of kettles, and the like, by using copper extracted from the region’s Mt. Yahiko.
Tsuiki means shaping metal by hand hammering, and in this case one piece of malleable copper plate will be extended using a range of traditional skills and techniques. Characteristics of Tsubame Tsuiki Coppereware include a shiny appearance created by tsuiki performed by a master artisan, and with time the texture of copper increases in attractiveness with long-term use and proper care. In addition to kettles, other beautiful Tsubame Tsuiki Coppereware every day articles include vases, water pitchers, teapots, and the like. And apart from looking so fine, tea poured from a copper teapot is said to have a milder taste due to the action of metal ions. Each product is made by several hundred thousand hammer blows making the outer side so smooth it looks like china. Tsubam
e Tuiki Coppereware was designated as a traditional craft by the Minister of Economy, Trade and Industry in 1981.

Tsubame City, Niigata Prefecture, famous for its production of metalwork, has a history starting from the making of Japanese nails in around the early Edo Period. Tsubame Tsuiki Doki originates with artisans from Sendai visiting Tsubame City sometime in the mid-Edo Period and introducing the copperware techniques of tsuiki; the hammering techniques of that time have been handed down for well over 200 years. Tsubame City is currently the only area producing tsuiki copperware in the country. The main reason for the development of the production of tsuiki copperware in the region is the high-grade copper ore extracted from neighboring Mt. Yahiko. Tsubame Tsuiki Coppereware over time developed techniques beyond the simple making of kettles and in the Meiji Period adopted metal carving techniques suited for more artistic crafts. Copperware, such as teapots, vases, and art work, which become more attractive over a long period of time has been loved for many years, and has become indispensable in daily life. A vase of Tsubame Tsuiki Coppereware was even dedicated to the Emperor Meiji in 1894. 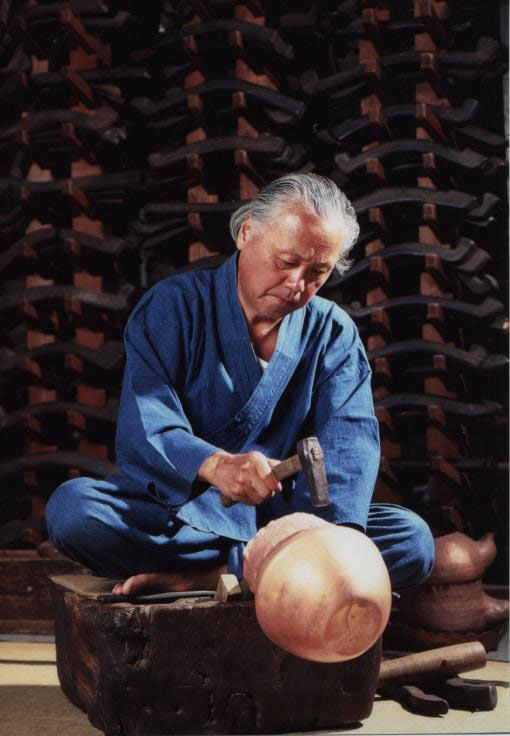