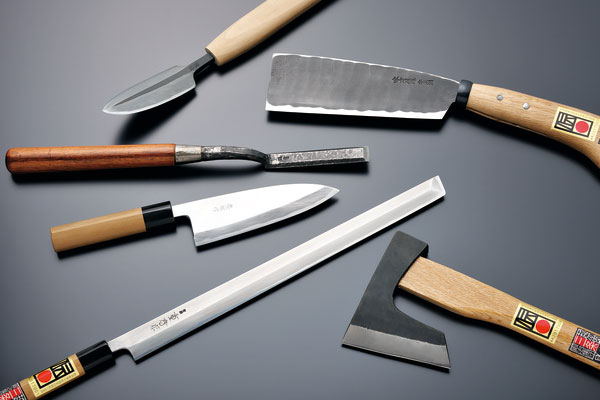 Echigo-Sanjo Uchihamono are hammer-forged blades produced in Sanjo City, Niigata prefecture. Unlike modern blades made using the stamp pressing and polishing techniques developed after the second world war, these blades are produced by hand-hammering using the traditional Japanese metal working techniques. Originally, farming tools were made, but nowadays, a broad range of cutting tools are produced, such as everyday kitchen knives and scissors, or hatchets and chisels. Echigo-Sanjo Uchihamono are distinguished by the high-standard of forge work in which red-hot metal is beaten and shaped. This forging technique enables easy shaping, and increases the blade’s strength by hammering out any space in the inner part of the metal, resulting in a high degree of strength and abrasion resistance. Some machinery may be used in the production process today, but the important processes that require highly-skilled work is carried out by hand to maintain the traditional high quality finish.

The history of Echigo-Sanjo Uchihamono dates back to the Edo period. Originally the techniques developed for making farming tools such as sickles and hoes. For two years from 1625, a local magistrate of the Sanjo Castle named Seibei OHYAMA invited nail craftsmen from Edo (current Tokyo) to teach the farmers how to make nails in order to lift them from poverty. Production of Japanese nails as a side job during the off-season increased, and some of the farmers became full-time blacksmiths. With this historical background, blacksmiths gathered around the current Sanjo City. There are documents that say there were already about twenty full-time blacksmiths in the castle town in 1661, and the forged blade industry in Sanjo is thought to have started around this time.