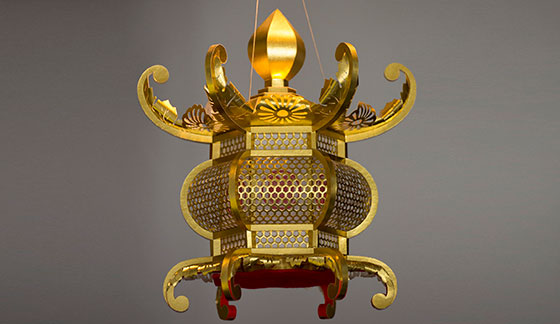 What is Yamaga lanterns ?

Yamaga toro are lanterns made of washi (traditional Japanese paper) produced in the area surrounding the city of Yamaga, Kumamoto prefecture. For the Yamaga Lantern Festival, an annual summer event, this craft is worn by one thousand dancing women wearing yukata (summer cotton kimono). Also, offerings of detailed shrine or castle replicas made to scale at around 1/20 to 1/30 reduction are given to the local Omiya Shrine during this festival.
This craft is unique for being made entirely of washi, glue, and with tools like a ruler, small knife, scissors, and flat iron but not clasps or fittings. While tools are used to make the architectural curves of the lantern, there is no space left for gluing and paper thickness is used to make the seams. These lanterns are made to scale, but the artisans add unique tricks of perspective and visual illusion to make any observer feel as though they are looking at the front of a real miniature building. Because the lanterns look so substantial and solid, it is hard to believe they are only made of paper. In 2013, Yamaga toro was designated as a Japanese traditional craft.

There are a number of legends concerning the history of Yamaga toro. One of the most told stories dates back to Emperor Keiko, the 12th emperor of Japan who reigned from 71 to 130 A.D. He was doing an imperial tour of the Kyushu region and got caught with his entourage in a very thick fog around the Kikuchi River flowing through the Yamaga area. Villagers lit torches to guide and welcome the party to the Omiya Shrine, which still exists today.
Since then, torches had been offered to the Omiya Shrine every year until in the Muromachi period (1336-1573), when they were replaced with paper gold lanterns. Historical records state that in the Edo period (1603-1868), wealthy merchants commissioned lantern artisans to make a particularly beautiful style of lantern, which they did in the style of a Japanese tatami room or five-storied pagoda still seen today.
Another reason for the development of Yamaga toro is the start of papermaking in the Yamaga area, which was a result of the battles of Bunroku and Keicho fought in Korea starting in 1592. Around this time, Kato KIYOMASA, a lord, returned with his army to Japan, and brought two papermakers, Kyoshun and Dokyo. The two artisans were officially commissioned to spread Japanese paper production, and later, Kyoshun moved to present day Yamaga, and introduced papermaking skills throughout the area. The industry thrived and led to the area around Yamaga becoming an important paper producing center which also helped promote Yamaga toro.