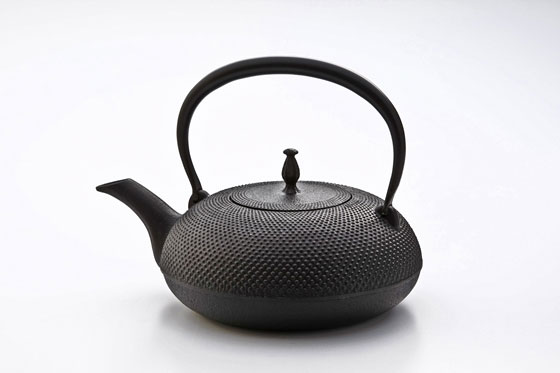 A 900-year history of craftsmanship
in Japan's northern nature

What is Nambu ironware ?

Nambu ironware (called Nambu tekki in Japanese) is a form of metalwork produced in the city of Morioka in Iwate prefecture. It is a traditional handicraft that was first created in the middle of the Edo period (1603-1868). The name "Nambu ironware" comes from the fact that it was first produced in the Nambu domain, a feudal domain that encompasses where Morioka is located now. While the Nambu domain no longer exists, the name of the ironware remains the same. Modern-day Nambu ironware also includes cast metal produced near Morioka, in the Sendai domain or current day city of Oshu. Nambu ironware is rust-resistant, long-lasting, well-insulated, and provides a uniform circulation of heat. The exterior of the kettle has a bumpy textured pattern called arare or hailstone which is often used in Nambu ironware to help increase the surface area of iron kettles. The iron kettles that are representative of Nambu ironware will vary individually because each artisan is free to create any arare pattern they like. Iron kettles are the most popular Nambu ironware item, but there are also Nambu ironware saucepans, wind chimes, and accessories.

Nambu ironware has its roots in the production of pots for tea ceremonies in the Nambu domain (Iwate prefecture) in the mid 17th century. Morioka has long been an area suited for the foundry industry due to an abundance of iron resources so casters were invited to the Nambu domain in order to encourage casting production. In 1659, a feudal lord who wanted to promote the tea ceremony ordered teakettle caster Nizaemon KOIZUMI to move from Kyoto to the area around the lord's castle in Nambu in order to start producing kettles. The Koizumi family first cast all the pots used for tea ceremonies in the Nambu domain at that time, as well as gifts for the emperor. Tea-casting techniques and control of the Koizumi firm was passed from father to son. An iron kettle smaller than the typical tea ceremony kettle was developed under the helm of third-generation tea caster Koizumi. It was called the "Nambu iron kettle" and came to be widely appreciated as a tea utensil. Emperor Taisho, who ruled from 1912 to 1926, visited the Tohoku region in 1908 and had the eighth-generation Koizumi tea-caster demonstrate the Nambu ironware production process for him. This event was covered in newspapers throughout Japan and led to an increase of Nambu ironware popularity. Today, all pieces produced in the Morioka and Mizusawa areas of Iwate prefecture are called Nambu ironware. 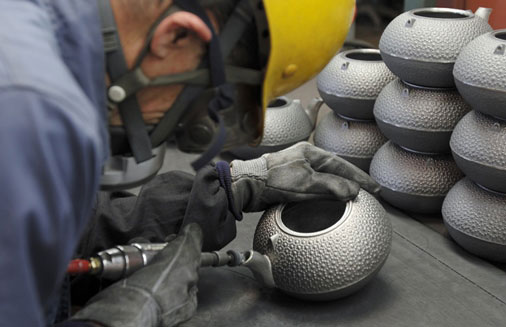 At Iwachu atelier, we have a gallery where visitors can enjoy many Nambu ironware items and also a factory where you can see how pig iron items are created.
You can buy pig iron items as well as kitchen utensils, different kind of ornaments and many other products in our shop too.

Itchu-do is a new brand of Japanese crafts that launched in 2009.
We create easy-to-use nambu ironware for everyday life. Our sophisticated universal items fit well in any lifestyle, fashion and trend.

See items made in Iwate