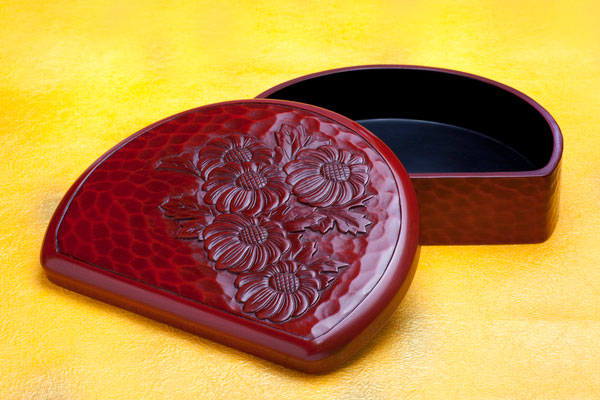 Heavenly carvings and unique patterns
from the engravings on Buddhist statues

Kamakura-bori is a type of lacquer ware made in the area around the city of Kamakura in Kanagawa prefecture. The tradition dates back to the Kamakura period (1185-1333) when Tsuishu and Tsuikoku, thickly lacquered wooden wares, were imported from China alongside other artistic crafts. The style of the imported wares was later incorporated with Japanese arts and traditional patterns and Kamakura-bori was born. Initially, sculptors of Buddhist ritual implements and temple carpenters that were influenced by Chinese art works started to carve vessels made of Japanese Judas tree or ginkgo and applied a lacquer finish to the pieces, and these were called Kamakura-bori. Today, production has spread to include everyday goods like inkstone cases, paperweights, plates, and trays. Kamakura-bori features chisel markings left intentionally to accentuate patterned areas. Another unique technique is to sprinkle black ink on a vermilion lacquered surface, in order for the patterns to stand out from the darkened background. The carving and lacquering techniques of Kamakura-bori have evolved for the past 800 years. Even today, Kamakura constantly attracts visitors looking for that perfect lacquer ware that will enhance daily life.

Kamakura-bori has its origins during the Kamakura period among the sculptors of Buddhist ritual implements and temple carpenters. In the Muromachi period (1336-1573), Kamakura-bori incense cases became popular in temples, and later, with the development of tea ceremony culture, Kamakura-bori incense cases and tea boxes began to be used. During the Edo period (1603-1868), Kamakura-bori spread beyond Buddhist ritual items, and daily goods began to be produced. Besides Chinese-style carvings, designs unique to Japan were gradually established.
At the beginning of the Meiji era (1868-1912), due to the passing of the Edict for Separation of Shinto and Buddhism by the Meiji government, an anti-Buddhist movement gathered momentum and led to a decline in the number of sculptors producing Buddhist items. Among the remaining sculptors, Itsuki GOTO and Kenzan MITSUHASHI were the two greatest who went on to develop the techniques of Buddhist sculpture and improve the quality of Kamakura-bori crafts. Since then, Kamakura-bori household items have gradually gained popularity among the general public, the techniques have continued to spread, and it is even used for interior design today. In 1979, Kamakura-bori was designated as one of the Traditional Crafts by the Ministry of Economy, Trade and Industry. 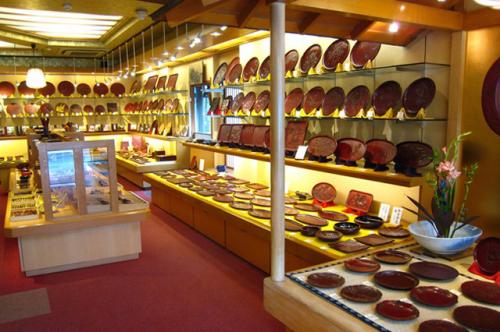 See items made in Kanagawa