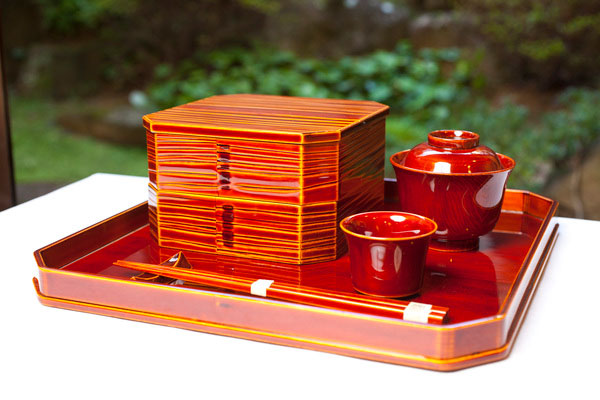 Simplicity of the wood grain
Austere and clear beauty

Hida-shunkei lacquerware is produced around the city of Takayama in Gifu prefecture. The name is said to come from the fact that the articles produced initially had a similar coloring to Hishunkei tea containers.
This craft is notable for having an interwoven harmony between the simple beauty of its natural wood grain and the characteristically clear lacquer. It can also be said that Hida-shunkei lacquerware pursues practical beauty, as its color and luster become more pronounced through use. Items include daily necessities such as trays, flower vases, stacked boxes, and tea utensils.
Hida-shunkei lacquerware's impressive color is a secret guarded by lacquer artisans who each have their own unique formulas for the clear lacquer. Therefore, the color tone varies in subtle ways depending on the lacquering master. 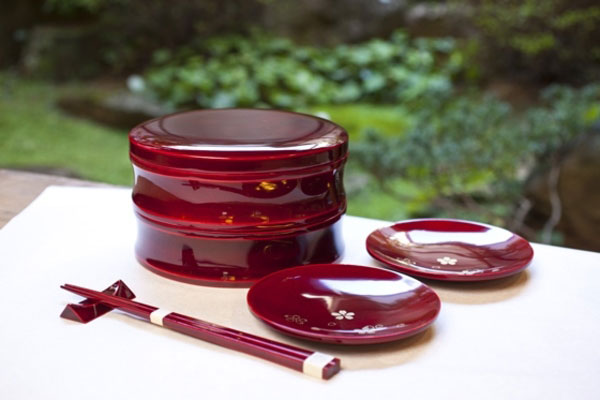 At the beginning of the 17th century, a master carpenter named Kizaemon TAKAHASHI was struck by the beauty of the wood grain of sawara cypress trees, and produced a tray using this wood. He then presented it to Sowa, the older brother of the lord of the Takayama domain. Hida-shunkei lacquerware is said to have begun when Sowa, who took a liking to this tray, asked the lacquering master San-emon NARITA to coat it with lacquer.
The coloring of this tray was similar to "Hishunkei tea container", a masterpiece by Kagemasa KATO who is a potter from the Kamakura period (1185-1333), so it was called Shunkei lacquerware and presented to the family positioned to be the next shogunate (feudal military government).
Then, this natural woodgrained craft was mainly used for tea utensils, after which many articles for daily use like stacked boxes and trays started to be produced. In the Meiji (1868-1912) and Taisho (1912-1926) periods, the lacquerware industry was promoted mainly by wholesalers, who exhibited their wares at World Fairs overseas, and Hida-shunkei lacquerware became well-known as a result.
Although there was a decline during World War II due to the difficulty in obtaining lacquer, during the postwar period of rapid economic growth this craft became widely given as a gift. In recent years demand has been increasing for Hida-shunkei lacquerware as souvenirs for tourists.