What is Niigata lacquerware ?

Niigata Lacquerware (called Niigata Shikki in Japanese) is a form of lacquerware produced in the area around the city of Niigata, Niigata prefecture. This craft has various coating techniques such as hana-nuri, ishime-nuri, nishiki-nuri, isokusa-nuri and take-nuri, so a great variety of styles can be enjoyed. Hana-nuri has simple beauty and luster, as no patterns are applied. Ishime-nuri has a stone-like roughness, with the coating providing a hard surface that is resistant to scratching. Nishiki-nuri involves repeated coating of colored lacquer with a wad of hemp cord, after which the surface is polished to make a mottled pattern in the various layers of lacquer. Like nishiki-nuri, isokusa-nuri also uses multiple layers of colored lacquer, but a board-shaped wad is used which makes a pattern that looks like seaweed swaying between waves. Take-nuri, where bamboo nodes and soot-stained impressions are drawn with lacquer, is the most representative technique of Niigata lacquerware. Additionally, there are various traditional lacquering techniques such as kinma-nuri, seido-nuri, aokai-nuri, roiro-nuri and shitan-nuri, as well as new lacquering techniques like yuhi-nuri. 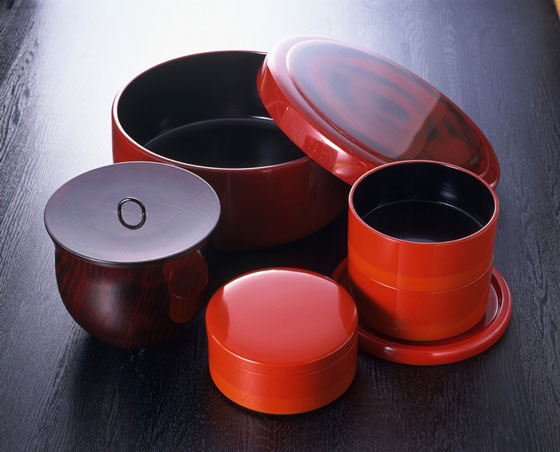 For a long time, the city of Niigata has been the center of trade where cultures from various places arrive by sea or land, with lacquerware being one of these imports. The history of this craft is said to have originated between the years 1615 and 1624, when shunkei-nuri, a lacquerware technique from Akita prefecture, was introduced. Initially, production was centered on items for daily use such as serving trays and small dining trays. In 1638, a monopolized sales region of lacquerware called Wandana was established in Niigata, assuring the production of lacquerware. The technique of maki-e* was imported between 1764 and 1771 while coating techniques unique to Niigata such as isokusa-nuri (elaborate patterning) and kinma-nuri (colored lacquer painted in cut-away areas) were created at the beginning of the 19th century. Since Niigata was a port of call for cargo ships sailing the Sea of Japan at that time, the market expanded to various other parts of Japan, including Tokyo and Osaka, so that by the end of the Edo period (1603-1868), Niigata had become Japan’s leading area of lacquerware production. Take-nuri, a technique to finish the lacquer coating with a bamboo-like appearance, was introduced in the middle of the Meiji period (1868-1912), and this became the technique most widely associated with this craft. The range of coating techniques for Niigata lacquerware are a result of absorbing technologies from various regions and the efforts of the people who developed them.