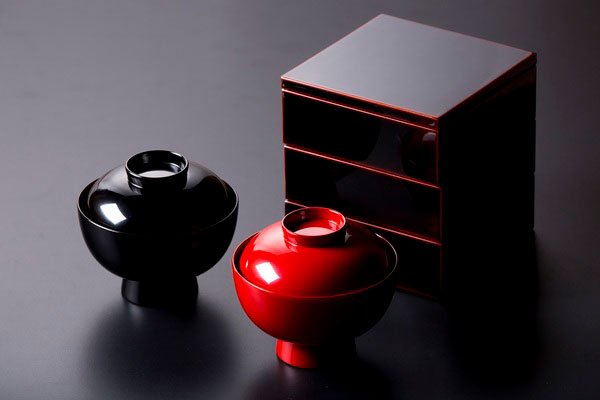 What is Echizen lacquerware ?

Echizen lacquerware (called Echizen shikki in Japanese) is produced in the area around the city of Sabae in Fukui prefecture. Lacquer is at the center of life in the Echizen district of Sabae, which is known as the city of manufacturing.
The notable aspects of Echizen lacquerware are its composed luster and refined brilliance which appeal to the people of Japan. That is why this lacquerware is often used for weddings and other events as well as the beautiful color combinations. As each process requires advanced techniques, they have been passed down throughout the generations. The production of these handicrafts starts with a group of lacquering masters called nushiya who are craftsmen that mainly work on the coating process, and the handicrafts are completed by dividing the workload among various experienced craftsmen. A huge variety of items are produced, from celebratory items, different kinds of boxes, tea utensils, chopsticks, and soup bowls.
Along with the changing lifestyles of Japanese people and market needs, Echizen lacquerware has developed diversified products and created technology for mass production. Today, Echizen ware represents more than 80% of the lacquerware for domestic food industry and business use. New styles of cutting-edge Echizen lacquerware continue to be released. 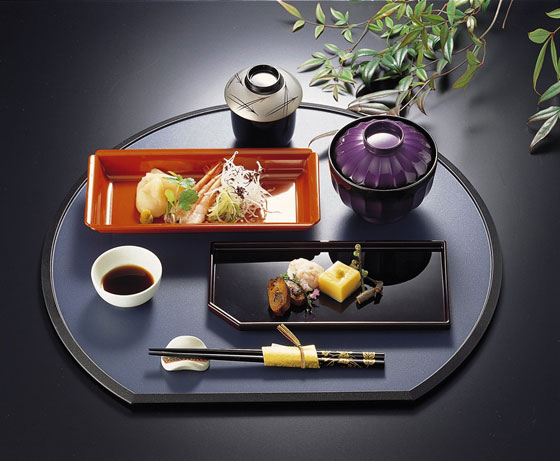 The history of Echizen lacquerware goes back to the end of the Kofun period (250-538) approximately 1500 years ago. When the 26th Emperor of Japan, was still the Imperial Prince, he came to Kawada in the Echizen domain, ordered repair work on his broken crown to be done by a lacquering master in the village of Katayama, modern-day Sabae. Subsequently, a black lacquered bowl was presented to the Imperial Prince together with the repaired crown. Impressed with its shape and quality, he is said to have sponsored the village of Katayama as a lacquerware-producing area.
During the time in which rice was paid as an annual tax, lacquer became a recognized alternative tax payment method in Echizen. Half of the domestic Japanese lacquer tapping was carried out in Echizen during its peak. Lacquer tapping workers used a technique to make a scratch on a lacquer tree in order to gather the lacquer liquid.
There are records from the time of the Nikko Toshugu Shrine construction (approximately 1617), that contain the names of Echizen workers who worked as lacquer tappers. Lacquer tapping being highly regarded by the Tokugawa shogunate (feudal military government, 1603-1867) and the popularity of Buddhist memorial services led to Echizen becoming the leading lacquerware producing area of Japan. Gradually, maki-e (gold lacquer in carvings) and chinkin (gold inlaid lacquerware) techniques were passed down, and solid and showy ornaments were added. During the Meiji period (1868-1912) various other products were produced, including small dining tables and flower vases. 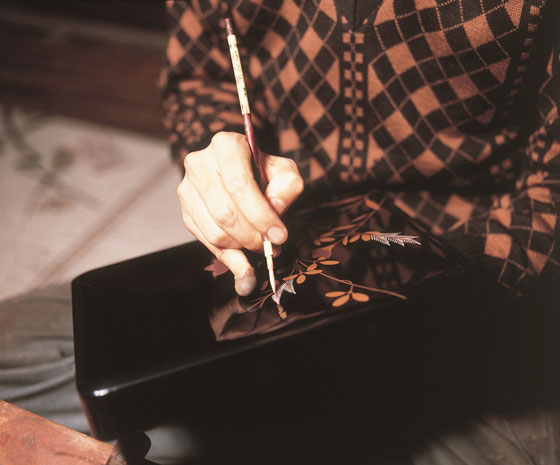