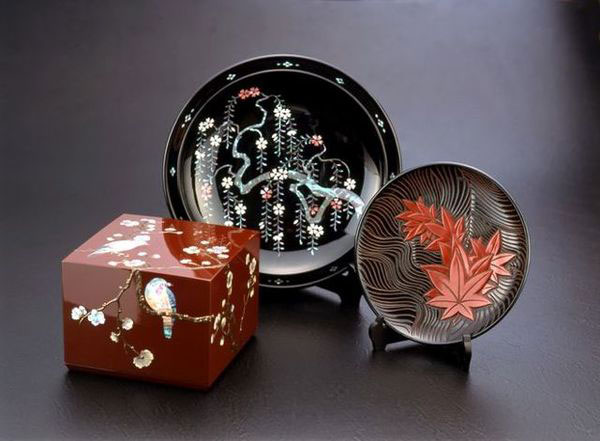 Mysterious and elegant patterns
that depict the beautiful ocean depths

What is Takaoka lacquerware ?

Takaoka lacquerware (called Takaoka shikki in Japanese) is produced in the area around the city of Takaoka, in Toyama prefecture. A defining feature of this lacquerware is the wide range of techniques and styles.
Aogai-nuri is a technique that uses pieces of aogai, thinly-shaved slivers of the shiny parts of seashells, to create triangular and diamond patterns that are then combined to express flowers, birds and natural landscapes. Decorative techniques that use seashells are collectively known as raden. While seashells of approximately 0.3 mm thickness are normally used for raden, seashells of approximately 0.1 mm are often prefered for Takaoka lacquerware. Using thinner seashells allows the color of the base lacquer to show through, giving the seashells a blue glow. The aogai-nuri technique is unique to Takaoka lacquerware.
Another technique is yusuke-nuri, created during the late Edo period (1603-1868) after much research by Yusuke ISHII, who deeply admired Chinese lacquerware from the Ming dynasty (1368-1644). It is a comprehensive technique that involves drawing Chinese-style designs of flowers, birds, natural landscapes and people using rust lacquer. This craft also uses the techniques of aogai, haku-e (gold leaf decorations), applying pebbles, and coating with lacquer.
Lastly, the technique of chokoku-nuri involves coating wood carvings with red or black lacquer. There are designs of plants, animals, peonies, peacocks, and wave crests on raimon (lightning fretwork) or hexagonal patterns, which creates a three-dimensional effect and gives it a unique luster. There are also kawari-nuri pieces that use materials such as plastic and glass. 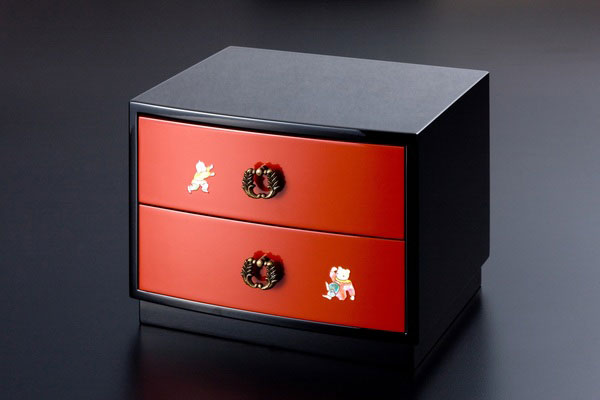 Takaoka lacquerware is said to have started around the year 1609, when Toshinaga MAEDA, the first lord of the Kaga domain (now Toyama prefecture), built the Takaoka Castle and ordered the production of weapons and items for everyday use such as dressers and trays. Takaoka Castle was unfortunately abandoned just five years later, but Takaoka subsequently transitioned to become a commercial and industrial town.
Tsuishu and tsuikoku techniques, which involve engraving designs on a thick base made by coating numerous layers of red or black lacquer, were introduced from China. Those styles created the foundation for the techniques that are used to this day, specifically, chokoku-nuri, raden and rust paintings. Chokoku-nuri was invented based on techniques used by Tanpo TSUJI, who was active between 1764 and 1772. Tsuji's works are also used in the wheeled floats that are paraded during the Takaoka Mikuruma-yama Festival. Tsuji's technique became popular in the early 19th century due to the emergence of master craftsmen such as Koemon ITAYA. In 1850, Yusuke ISHII invented yusuke-nuri after studying Chinese lacquerware from the Ming dynasty, which then grew in popularity during the Meiji period (1868-1912). Recently, kawari-nuri, which involves coating lacquer on various materials, has been garnering attention particularly from the interior design industry.