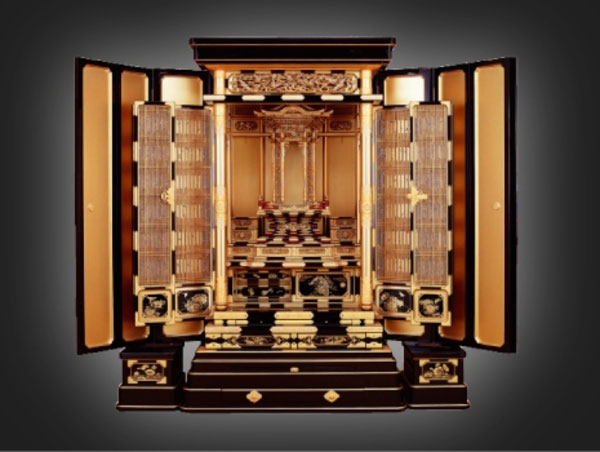 What is Kawanabe Buddhist altar ?

Kawanabe Buddhist Altars (called Kawanabe Butsudan in Japanese) are made in the Kawanabe area of Minamikyushu, Kagoshima prefecture. There is a specific type of altar called gamado that is unique to this craft. Gama means cave in the Kagoshima dialect. A gamadan, which combined a pedestal and small statue of Buddha in an altar that can fit in confined, small places like a cave, developed because Buddhist followers secretly chanted and prayed in a hidden cave due to suppression of their Buddhist sect, Jodo Shinshu. Similar to the crypto-Christians camouflaging their religious practices by placing a Virgin Mary statue in a Buddhist altar, hidden Buddhist altars that looked like a chest of drawers from the outside were made in the Kawanabe area. Gamadan and the hidden Buddhist altars are said to have strongly influenced the development of gamado. Altars similar to gamado are produced in this craft, like sanpobiraki, donaga, handai-tsuki, and betsudai-tsuki. Possessing a black-lacquered base decorated with gold leaf, this craft has built a reputation as a beautifully carved small Buddhist altar over the years. The production techniques are not just used for Buddhist altars, but also portable Shinto shrines for events, the interior design of cafes, and the Kyushu bullet train.

There is a historic site called Kiyomizu Magaibutsugun where Buddha images are carved on the five hundred meter cliff by the Kiyomizu River running through the center of the Satsuma penninsula. A number of pagodas for memorial services, Buddha images, and Sanskrit characters have been carved on this cliff from 1264 through the Meiji period (1868-1903), demonstrating the region's long ties to Buddhism. Altar production is believed to have been established in the early 12th century, and the oldest black-lacquered memorial tablet in existence is dated September 6, 1336. The Jodo Shinshu sect was banned by the Satsuma domain (now Kagoshima and Miyazaki prefectures) in 1597 because the uprising of the Ikko sect (part of the Jodo Shinshu sect) followers in the city of Kaga and the Battle of Ishiyama (decade long campaign by Nobunaga ODA, a feudal military leader and Jodo Shinshu temples) made feudal lords fear the Jodo Shinshu sect. Continued persecution over the next three centuries forced followers to secretly meet in caves and hide Buddha statues and the phrase "Hail Amitabha Buddha", all of which simply strengthened faith among followers. Following the restoration of religious freedom in 1876, the production of Kawanabe Buddhist Altars increased. It gained traditional craft recognition in 1975, which brought nationwide recognition.