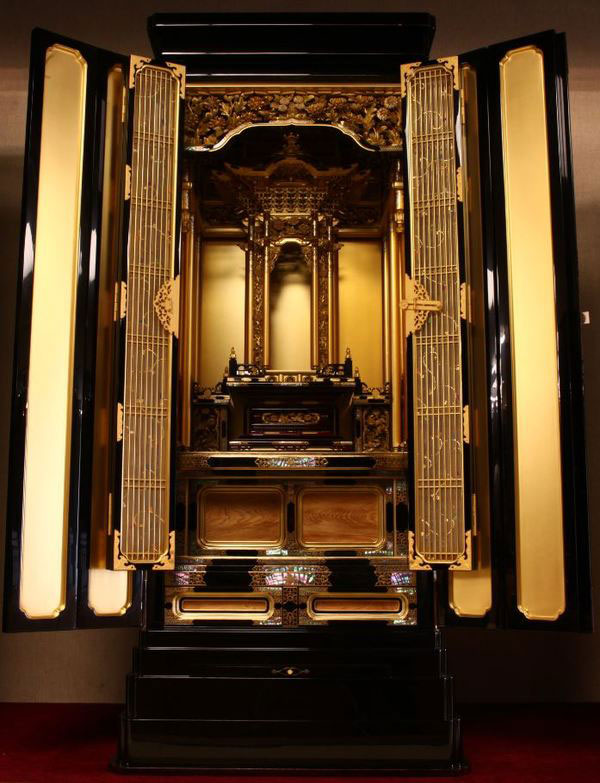 What is Hiroshima Buddhist altar ?

Hiroshima Butsudan are golden Buddhist altars mainly produced in Hiroshima City, Hiroshima Prefecture. The Buddhist sect, Jodo Shinshu has been widely worshipped in Hiroshima since ancient times, and many golden altars recommended by the sect were produced for its followers. Hiroshima Butsudan is characterized by its sophisticated urushi lacquering techniques and elaborate fine metal ornaments. One of the noteworthy features is the use of whitewash base coating, which is made of local oyster shells that are crushed to fine powder and mixed with lacquer. Hiroshima Butsudan uses the tatenuri technique for top coating. The technique requires very high skills, and lacquering artisans come from all over the country to learn these skills. Inside of the altar is decorated with wood sculptures portraying the life of the holy priest Shinran, as well as the introduction of Buddhism to Japan, and is layered with gold leaf. The gorgeous, golden sheen of the altar expresses Buddhist paradise. There are seven steps in producing Hiroshima Butsudan of which expert craftsmen are responsible for each process. Each part of the altar is hand-built with highly skilled craftsmanship. The traditional arts of Japan is gathered in one Buddhist altar.

Hiroshima Prefecture is known as a historic place where the holy priest Shinran’s disciples founded Kosho-ji Temple and Shorinbo Temple to propogate Jodo Shinshu. The Jodo Shinshu sect found favor among the people in Hiroshima under the wing of the feudal lord Mori, increasing the number of followers and production of Buddhist altars. In 1619, Nagaakira ASANO transferred his domain from Kishu (current Wakayama) to Hiroshima by the Shogunate’s order. The artisans that accompanied him introduced the outstanding urushi lacquering techniques to Hiroshima and provided a progressive improvement in the production techniques of Hiroshima Butsudan. In 1716, Buddhist priest Tonko brought in prodigious techniques of Buddhist altar and altar fittings production from Kyoto and Osaka, and the altar production techniques achieved further sophistication. In the late Edo Period, a number of artisans with adept craftsmanship, such as lacquer painters who painted sword sheaths and artisans who made ornamental metal parts, gathered and settled in Hiroshima, and Buddhist altars using their techniques were produced. In the Meiji Period, Hiroshima Butsudan made inroads into the Kyoto and Osaka regions by virtue of the waterway traffic through the Seto Inland Sea. Its superior quailty was highly valued in various regions, and demand for Hiroshima Butsudan increased. Hiroshima Butsudan flourished even further in the late Taisho Period, and Hiroshima became the largest Buddhist altar production area in Japan. The demand for altars and the number of artisans decreased abruptly and sharply with the devastation of World War II and the atomic bombing. The time-honored traditional techniques however, were revived by surviving artisans and have been passed down to younger generations up to this day.