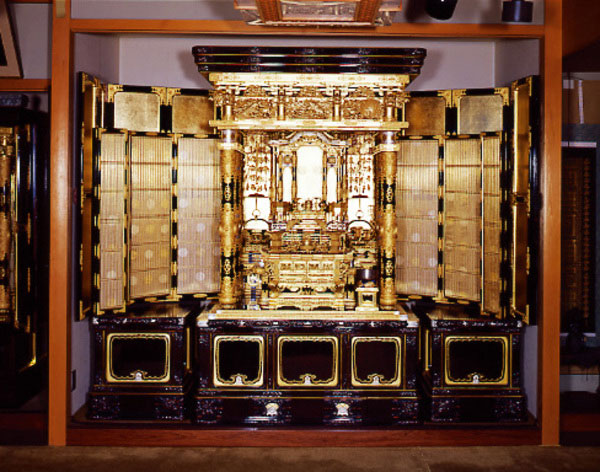 The ultimate in artisan technologies
The gate to wonderful paradise

What is Nagoya Buddhist altar ?

Nagoya Buddhist Altars (called Nagoya Butsudan in Japanese) are produced around the city of Nagoya, Aichi prefecture. Usually high grade trees such as Japanese cypress, zelkova, or sandalwood are used for the base. Nagoya Buddhist Altars have a high platform outfitted with mitsumakuri or three lifting doors in the front of the platform, as well as a magnificent and luxurious framework called kuden obotsukuri. Originally, the altar platforms were made high to protect the altars from being damaged by the frequent flooding of the nearby rivers. There is a storage space for altar fittings in the platform, and as the altars are built using a wood joinery technique which doesn't use nails, it is easy to assemble and disassemble. They can be cleaned or repaired easily. Nagoya Buddhist Altars have an integrated production system of eight professionals to handcraft a single altar. Each of them are professionals of woodwork, the inner sanctuary, sculpture, lacquerwork, maki-e work, exterior metalwork, interior metalwork, and gilding. As the altars are a combination of professional work based on the size, wooden base, sect, building and finishing, there are countless, various types of altar styles.

As a city near the resource rich region of Kiso, Nagoya used to be a wood distribution area, which made the process of getting materials for Buddhist altar production simple. Many artisans that had adept craftsmanship for Buddhist altar related production like sculpture and lacquerwork as they specialized in building temples and shrines, settled in Nagoya. In addition, the establishment of the danka parishioner system, which required the affiliation between households and Buddhist temples, is said to have led to the remarkable growth of this craft. The history of Nagoya Buddhist Altars dates back to 1695, when Jinemon TAKAGI founded a Buddhist altar shop called Hiroya. Under the financial protection of the Owari domain (presently Aichi prefecture), merchant guilds were developed to enable the Buddhist altar artisans to establish and refine their techniques, leading the areas in and around current Naka-ku, Nagoya to become the hub of altar production.
Altar production gained ground as lower-class samurai’s extra source of income by the end of the Edo period (1603-1868), with the continued development of new techniques that kept pace with the changing times. In 1976, Nagoya Buddhist Altars were recognized as a traditional craft by the Minister of Economy, Trade and Industry. Now having more than two hundred Buddhist altar and altar fitting businesses, Naka-ku, Nagoya is Japan’s most densely populated Buddhist altar business area.