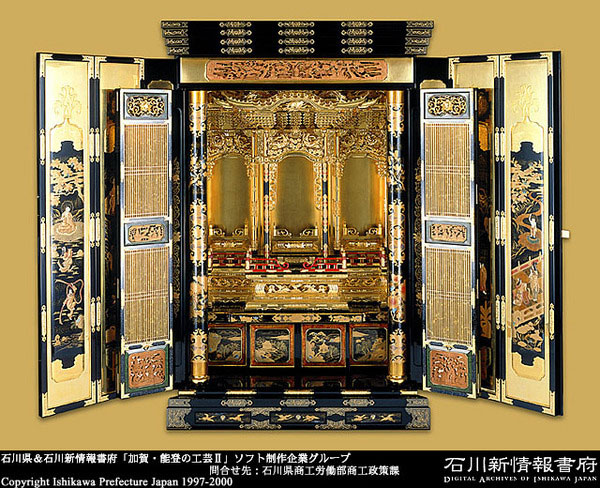 What is Nanao Buddhist altar ?

Nanao Buddhist Altars called Nanao Butsudan in Japanese, are Buddhist altars produced in Nanao City, Ishikawa Prefecture. As part of the Hokuriku region where the Buddhist sect Jodo Shinshu became widely spread long ago, Ishikawa is home to many well-known Buddhist altar production areas such as Kanazawa Butsudan and Mikawa Butsudan. Nanao Butsudan is characterized by its robustness and splendor. As the Noto area, where Nanao City is located, is a mountainous area, finished Buddhist altars were carried on the mountain trail. The geographical constraints led to robustness in altars that could withstand transportation in this harsh environment. Using unique techniques such as hozogumi (tenon assembly using no nails) and niju-kagamiita (double-layer back boards behind a principal image and attendant images), Nanao Butsudan boasts a sturdy structure. Ishikawa has been performing steady growth as the center of exquisite craft production such as urushi lacquer work and gold leaf craftwork since ancient times. Subtle and profound techniques display their characteristics in Nanao Butsudan. Rich with gold leaf and Maki-e designs inlaid with mother-of-pearl, dual gable called niju hafu delivers a stately aura. While Kanazawa Butsudan is shrouded in gracefulness, Nanao Butsudan gives a luxurious but solemn impression.

History of Nanao Butsudan dates back to the early Muromachi Period, when the HATAKEYAMA clan as the provincial constables of Noto built handicraft workshops to protect urushi lacquer work, Maki-e and wood sculpture industries. It is at this time that the technical fundamentals of Nanao Butsudan were developed. In 1582, Toshiie MAEDA attracted more artisans after he moved into the Nanao Castle. There was a street bustling with nushi (lacquer painters) according to the record of the Kaga clan dating back to 1616. As Buddhist altar shops are called nushiya in Nanao, this meant that a town full of Buddhist artisans had already been formed at this time. The material for Nanao Butsudan, hiba arborvitae, a species of cypress, and cypress grew in extreme abundance in the Noto area, and the humid climate of Noto suited urushi lacquering. The Noto area respected the tradition of festivals and produced mikoshi portable shrines. Techniques for producing mikoshi and those for producing Buddhist altars were quite the same, and this is believed to be the reason why Buddhist altar production took root in Nanao. As the hub of the Noto area where the Jodo Shinshu sect was widely worshipped at the time, there was a large demand for altars in Nanao, and this allowed them to retain a dominant position in altar production to this day. In 1978, Nanao Butsudan gained a national recognition as a traditional craft for its long history and prodigious techniques.