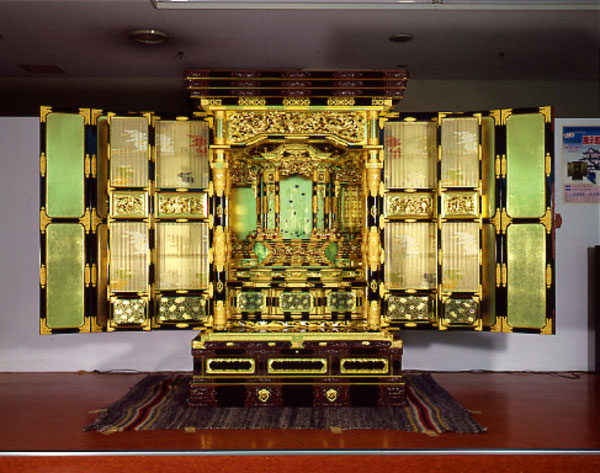 Developed under a powerful shogun
Top-quality and local materials

What is Mikawa Buddhist altar ?

Mikawa Buddhist Altars, called Mikawa Butsudan in Japanese, are made in the Mikawa area of Okazaki, Aichi prefecture. In the region, as it was a custom to place a Buddhist altar in the closet, there were demands to make the pedestal of the altar lower for easier everyday use. The pedestal was tailored to the dimensions of the closet and were made with three drawers. Mikawa Butsudan is characterized by its size to fit in a closet as well as its luxurious appearance which can especially be seen in its unique Uneri Nageshi style applied to transoms or the roof that allows the beautiful inner sanctuary and Buddha statue to be clearly visible. Mikawa Butsudan was designated as a traditional craft by the Minister of Economy, Trade and Industry, together with the Toyohashi Brushes and Tokoname yaki (ceramics) of the same region.

The Buddhist sect Jodo Shinshu was first introduced to the Mikawa area in the Kamakura Period, and took root among local commoners during the Muromachi Period, contributing to Buddhist altar production. Patronized by the shogunate government, current Okazaki City, known as the birthplace of Ieyasu TOKUGAWA, steadily grew as the center of altar production with the development of Buddhism. The 117 kilometer long Yahagi River is one of Japan’s first-class rivers that flows through Okazaki City from Nagano Prefecture through Gifu Prefecture, entering Aichi Prefecture all the way to Chita Bay. After Ieyasu TOKUGAWA worked on flood control of the Yahagi River, where there were many tributaries, Yahagi River became the hub of water transport. With pine, Japanese cedar and Japanese cypress drifting from the upstream, high-quality Urushi lacquer being available in the northern Mikawa area, and advanced casting and forging techniques being introduced to the Mikawa area, Okazaki City became a favorable place for altar production where the Shohachi family started producing Mikawa Butsudan in 1704.