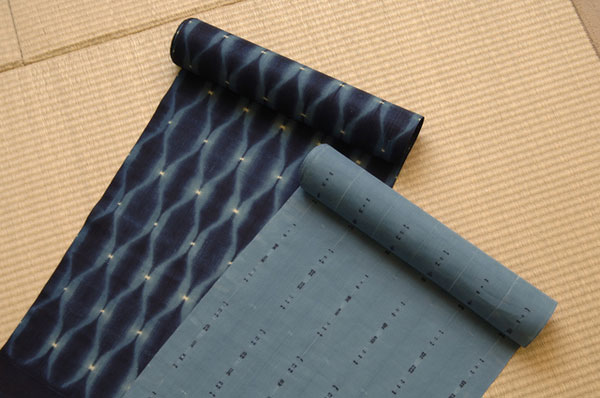 Bright and delicate patterns
A blend of nature and artisan's skills

What is Honba oshima tsumugi silk ?

Honba Oshima Tsumugi is a fabric made on the island of Amami, Kagoshima prefecture. It is one hundred percent plain silk that has been dyed and made on handlooms like shime-bata or te-bata. This textile has deep, muted tones as it is dyed with yeddo hawthorn and iron-rich mud, and has delicate kasuri splash patterns. Even with continued wear, this fabric hardly loses its shape and the texture improves. As a sleek, light, wrinkle-resistant, and easy to wear textile, Honba Oshima Tsumugi is appreciated by many for being comfortable. There are over thirty intricate production steps and at least half a year is required, from harvesting to designing and weaving, to finish production on a single textile. Recently, in addition to traditional products, craftsmen have developed silk textiles with new colors and designs. By increasing the types of colors, patterns, and textures, this traditional fabric is made more attractive for kimonos worn at occasions such as the coming-of-age ceremonies and weddings. Also new styles of fabrics for Western clothes and interior design are currently being developed.

Honba Oshima Tsumugi first appears in the history of Amami during the seventh century and developed into the current production area up until the early eighteenth century. It is said that production techniques were introduced to the Kagoshima mainland as well, but the origin is uncertain as few historical records exist. However, it is documented that the Satsuma domain (present day Kagoshima prefecture) banned residents of Amami from wearing tsumugi in 1720. Amami Oshima is located between Kagoshima and Okinawa, which historically made it a mixing pot of cultures from the north and south, as well as an important stopping off point for trading ships en route to the south. Between the years 1850-1855, a clansman of the Satsuma domain stayed in Amami and wrote, "Essay of a Southern Island", which describes the clothing and sericulture of Amami with some illustrations. The subtropical climate of Amami is ideal for silkworms, which is why the development of a textile industry is a natural fit. Around 1907, the shime-bata handloom started to be used and their unique kasuri splash pattern that cannot be seen anywhere else in the world was completed. World War II caused substantial damage to the industry in both Amami and Kagoshima but fortunately in 1950, funds were invested into restarting production of this craft. Due to yen currency rates and dramatic changes in modern lifestyles, production today is less than ten percent of the peak, but it is loved as a valuable product of the island.